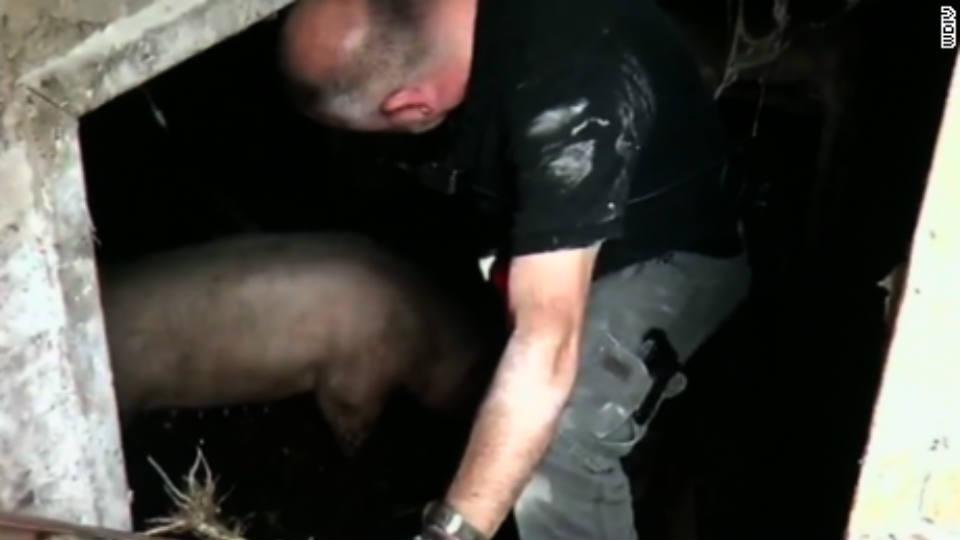 (CNN) -- A report of a gruesome crime scene turned into an unlikely porcine rescue operation.

Police arrived at a West Detroit home after an anonymous phone call Friday complaining about a smell and that a pig was being fed human remains. Cadaver dogs were called in, but didn't detect any bodies.

Police believe the call was a prank to get an immediate response.

But authorities did find a 400 pound pig in the basement.

The animal was trapped. There were no steps, only a ladder leading down into it.

After trying to get the pig out with a tow truck harness, a makeshift ramp was built and the pig was coaxed with food, but it wouldn't budge.

Detroit Police video shows a man trying to free the pig, and dealing with the messy situation.

\"Do you see anything down there? Yeah I can see all the way to the other side, it's a foot of pig crap,\" is heard on the tape.

After nearly 12 hours, \"They eventually got the pig on the ramp and people pushed the pig up,\" Detroit Police Capt. Harold Rochon told CNN affiliate WDIV. He also said he had never seen anything like this before in his career.

The house, which may be condemned, belonged to man who owned several other properties in the area and recently died of natural causes.

The hog was taken to a nearby animal rescue and rehabilitation farm.