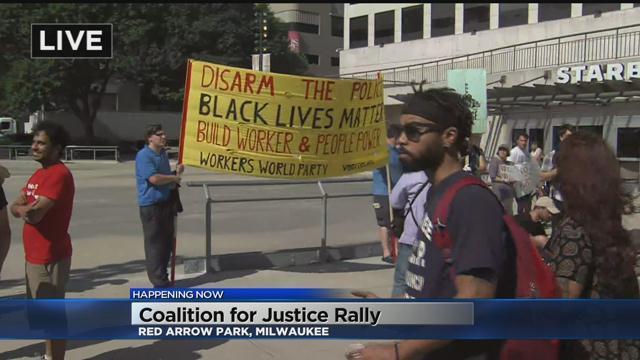 A group of demonstrators  gathered at Red Arrow Park in downtown Milwaukee Monday afternoon to show solidarity with the black men killed in officer involved shootings in Louisiana and Minnesota.

The Coalition for Justice organized the protest. This is the same group that has been marching through downtown Milwaukee since the officer involved shooting of Dontre Hamilton during a struggle with a now fired Milwaukee police officer.

The group was joined by supporters of the family of Jay Anderson who was fatally shot by a Wauwatosa Police Officer who said he feared for his life when he approached Anderson's vehicle in the overnight hours at Madison Park.

A gun was later recovered from Anderson's car. MPD is now investigating the Tosa's officer's actions. The family says he was sleeping in the park. They do not believe he would have threatened an officer.

Alton Sterling in Louisiana and Philando Castile in Minnesota also had handguns on them.

The subject of the three investigations is whether the officers acted appropriately, and verifying the perceived threat at the time of opening fire.

The Milwaukee protest included the group sometimes stopping at intersections. Traffic was stopped. But, the group moved on after a short amount of time.

A local law enforcement sources tells CBS 58 that police are closing roads as the demonstrators pass by, and then re-open those roads as they pass.

Organizers have promised a peaceful demonstration.

There were no arrests.