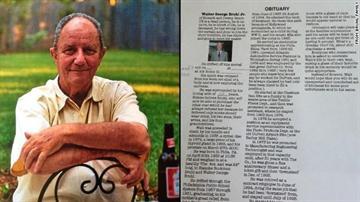 The Delaware man, who died Sunday, penned his own humor-tinged obituary and left it for his family to find. Family and friends honored him with a private luncheon on Saturday.

\"Walter George Brulh Jr. of Newark and Dewey Beach is a dead person; he is no more; he is bereft of life; he is deceased; he has rung down the curtain and gone to join the choir invisible; he has expired and gone to meet his maker,\" he wrote, quoting from Monty Python's sketch about a dead parrot.

\"Right away I was crying,\" Walter's grandson Sam Bruhl said. \"I laughed and cried the whole time.\"

The obituary included fill-in-the-blank spaces for the date and location of his death.

The 80-year-old grandfather of four wrote about his years in the Marine Corps during the Korean War, saying \"Hollywood propaganda\" prompted him to join the war effort.

\"This was him to a T,\" said his son Martin Bruhl, who describes his father as a man who loved life and making others smile.

\"There will be no viewing,\" Walter Bruhl Jr. wrote, \"since his wife refuses to honor his request to have him standing in the corner of the room with a glass of Jack Daniels in his hand so he would appear natural to visitors.\"

\"I'm sure he is laughing back down at us,\" Martin Bruhl said. \"It has helped to lighten things for us.\"

\"Typical of my PopPop,\" he wrote in a Facebook post. \"He's the only man I've ever known to be able to add his own humor like this.\"

On the first day, the Reddit post had more than 1,600 comments, said Sam Bruhl. \"I tried to read them all and comment back because it meant so much,\" he said.

In the last line of the obituary, Walter encourages people to \"do an unexpected and unsolicited act of kindness for some poor unfortunate soul in his name.\"

Bruhl's words have generated an outpouring of support.

\"We have noticed people making donations to charities in his name,\" said Martin Bruhl, \"I know he would have loved that.\"

He added, \"He loved, loved to write. He always wanted to be published, and this is a home run.\"

\"Some of my favorite comments...were people saying they missed him and never even met him,\" Sam Bruhl said.

Walter died of congestive heart failure while on vacation with his wife of 57 years.

\"Everyone who remembers him is asked to celebrate Walt's life in their own way; raising a glass of their favorite drink in his memory would be quite appropriate,\" Walter Bruhl wrote.

He added, \"Cremation will take place at the family's convenience, and his ashes will be kept in an urn until they get tired of having it around. What's a Grecian Urn? Oh, about 200 drachmas a week.\"