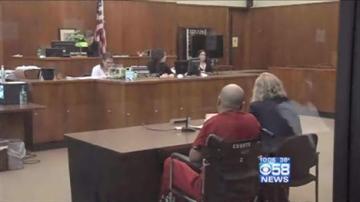 MILWAUKEE-The father convicted of sexually assaulting his five daughters took every opportunity to bash the judge during sentencing Monday.

The man, who we are identifying as E.B., to protect the victims, had repeatedly interrupted the trial claiming unfair procedures by the judge.

Judge David Borowski removed E.B. as his own defense attorney because  of outbursts and inappropriate questioning of the witnesses.

E.B. was kept in another room for some of the testimony and forced to watch on a screen.

\"If I was the man who did all these horrible crimes,\" E.B. said during sentencing, \"why would you engage in a vindictive prosecution? So, with all respect to the court, but not to the man, I'm through.\"

The judge sentenced E.B. to more than 100 years behind bars.

\"I will say this,\" began Judge Borowski, \"if this defendant was released in five or ten or even 20 years I believe he would retaliate against his victims.\"

As he was being wheeled off to prison, E.B. offered interviews to any reporters who would meet him at the jail.