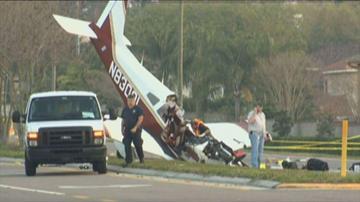 CLEARWATER, Fla. (CBS NEWS) -- One person is dead after a small plane en route to Florida from Chicago crashed near Tampa.

Authorities say the single-engine plane crashed at about 4 a.m. Saturday in Clearwater.

According to the Clearwater Police Department, the aircraft came to a rest on the median of a six-lane street. Firefighters responded and extinguished several small fires from debris on the road.

Fifty-three-year-old Jeffrey Bronken was killed in the crash. Fifteen-year-olds Katherine Bronken and Keyana Linbo were injured and taken to St. Joseph's Hospital in Tampa for treatment.

All three are from Round Lake, Ill., about 50 miles north of Chicago.