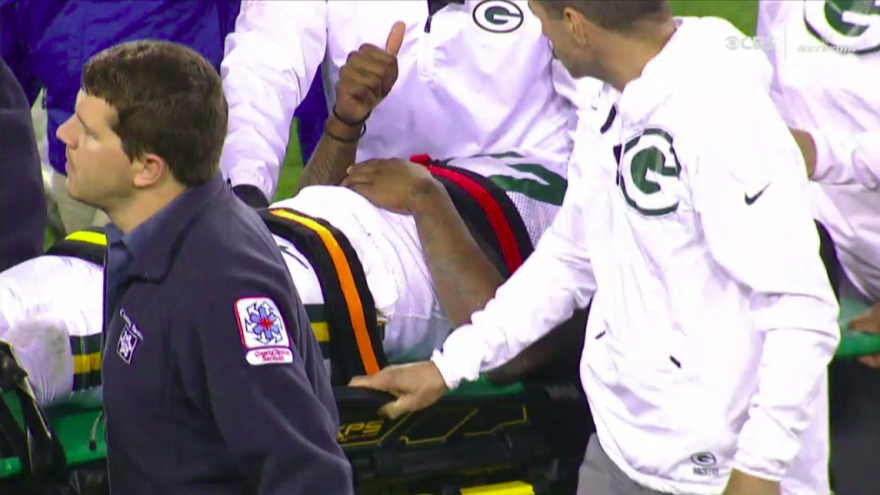 GREEN BAY, Wis. (AP) — Packers receiver Davante Adams was taken off the field on a stretcher with about 4 minutes left in the third quarter against the Chicago Bears on Thursday night after getting hit in the head during a tackle by Danny Trevathan.

The game was delayed for about 5 minutes while medical personnel tended to Adams. He gave a thumbs-up signal as he was wheeled off the field.

Davante Adams gives a thumbs up while being taken off the field. pic.twitter.com/xnD7gL17EK

The Packers said Adams was conscious and taken to a hospital for evaluation for possible head and neck injuries, and that he had feeling in all of his extremities.

Trevathan was called for an unnecessary roughness penalty following Adams' 8-yard catch to the Chicago 8.

He was replaced by rookie Jamaal Williams, who was knocked out midway through the second quarter with a knee injury. Linebacker Joe Thomas also the game with an ankle injury.

The Packers led 28-7 in a game that was also delayed about 45 minutes between the first and second quarters because of a lightning storm. Both teams were coming off overtime wins Sunday.

Green Bay, in particular, has been hit hard by injuries this season. The Packers had to shuffle their offensive line with starting tackles David Bakhtiari (hamstring) and Bryan Bulaga (ankle) already out with injuries.