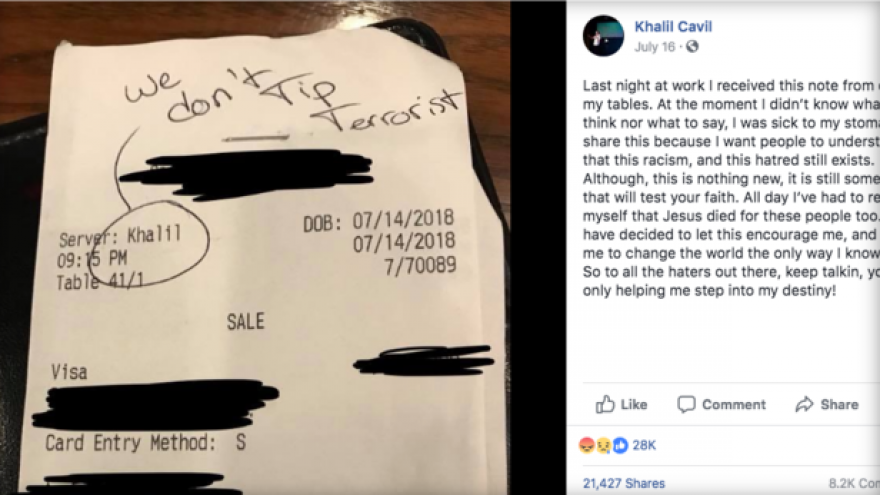 (CBS NEWS) -- A waiter at a Texas steakhouse made up the viral story about a customer leaving him a racist note, his employer said Monday. The story gained national attention after Khalil Cavil, a 20-year-old server for Saltgrass Steak House in Odessa, Texas, posted a now-deleted image of the receipt he claimed was left for him on July 14.

On the bill, Khalil's name was circled and the words, "we don't tip terrorist," were written at the top.

Cavil wrote in his post, which was deleted as of Tuesday morning: "I share this because I want people to understand that this racism, and this hatred still exists. Although, this is nothing new, it is still something that will test your faith." Cavil's Facebook page also appears to have been deleted.

Saltgrass originally said it had banned the customer blamed for the message. But now, the restaurant's corporate office says it has learned the story was a hoax.

"After further investigation, we have learned that our employee fabricated the entire story," Terry Turney, COO of Saltgrass Steak House, told the Odessa American in a statement. "The customer has been contacted and invited back to our restaurant to dine on us. Racism of any form is intolerable, and we will always act swiftly should it occur in any of our establishments.

"Falsely accusing someone of racism is equaling disturbing," Turney said.

Cavil also admitted to newspaper that he wrote the "we don't tip terrorist" note himself.

"I did write it," Cavil told the Odessa American. "I don't have an explanation. I made a mistake. There is no excuse for what I did."

After sharing his post on Facebook, Cavil had received monetary donations, which he told the newspaper is now being returned.

(CBS NEWS) -- A Texas steakhouse has banned a customer who left a server with no tip and a racist message on a $108 bill last weekend, according to local reports. The story gained national attention after Khalil Cavil, a 20-year-old server for Saltgrass Steak House in Odessa, Texas, posted an image of the receipt left for him on July 14.

The customer had circled Khalil's name and scrawled the words, "we don't tip terrorist."

Cavil wrote in his post, "I share this because I want people to understand that this racism, and this hatred still exists. Although, this is nothing new, it is still something that will test your faith.

"At the moment I didn't know what to think nor what to say, I was sick to my stomach," Cavil wrote Sunday on Facebook.

But he wasn't going to let "the haters" get him down, writing: "All day I've had to remind myself that Jesus died for these people too. I have decided to let this encourage me, and fuel me to change the world the only way I know how. So to all the haters out there, keep talkin, your only helping me step into my destiny!"

As of Thursday afternoon, Cavil's post garnered more than 27,000 reactions and more than 21,000 shares. Many condemned the customer's actions. Some people even offered to pay the tip.

On Wednesday, Cavil posted a follow-up message, thanking his family and members of the public for standing by him and for the monetary donations sent his way.

"I want to make it very clear that this was never about the tip nor the money," Cavil wrote. "It was about igniting conversations because I believe real change happens when we start talking about the issue and acknowledging its there."

Cavil says he is taking all the funds and donating them to the missionary work through his church. "Let's make the enemy pay by helping other people establish the Kingdom of God here on earth," he wrote.

Terry Turney, COO of Saltgrass Steak House, told the Odessa American that the customer responsible for the message has been banned from the restaurant. "We stand by and support our employee. Racism of any form is unacceptable," he said.

Cavil declined to identify the customer, according to the newspaper.