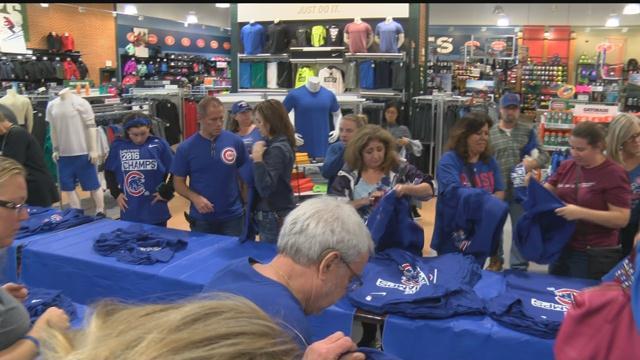 Dick’s Sporting Goods in Kenosha ran out quickly of Cubs World Series shirts. They sold out as soon as they opened its doors this morning.

Lourdes Velez was an early customer. However, she came back for more gear.

"I've also gotten some of the championship t-shirts and earlier I got 17 of the grey ones," Velez said. But, she’s still waiting on Cubs hats.

She said every member of her family needs to be part of the celebration.

"That's what fans do,” Velez said. “You know they don't care what they are going through. They'll stand there, no matter how long."

It has been a waiting game for many faithful fans. Some stood in the store for two to five hours.

Jessica Cranley said, "It's been 108 years, we had to come do this. It’s very exciting. I stayed up late last night."

Even Eric Peters, who’s a cardinal fan, stood in line for a friend in South Carolina.

"People tell me to watch out, might get jumped,” Peters said. “It's awesome. It was a great World Series. I didn't expect it to go seven games."

As for Velez, she said fans want to be part of history.

"How many years has it been? More than 100 years waiting for this moment,” Velez said. “So it's very special."