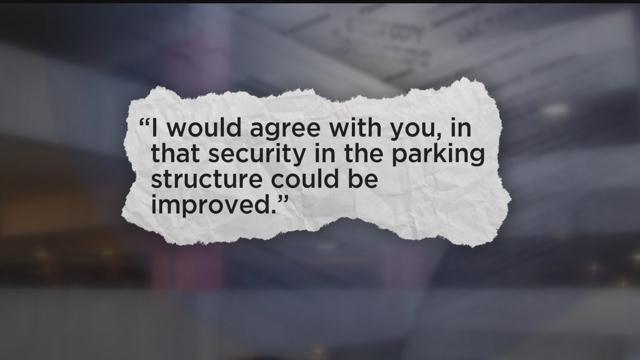 According to police, dozens of car windows were shot out inside the garage last week by a pair of teens who then stole at least two cars. Those two teens were eventually arrested on February 4th, after shooting BB guns through a pair of Milwaukee homes.

According to the Sheriff's Office, the only available video is from the outside of the garage, and unusable.

Sheriff David Clarke says he's gone back and forth with airport officials and Homeland Security over the need for cameras inside the garage.

Surveillance capability, especially around airports, is paramount.  I have gone back and forth with TSA and GMIA over the need to enhance  anti-terrorist capabilities.  Now is the time to strengthen airport security.  This has always been about protecting our travelers.

Clarke provided CBS58 with a series of letters between his office and Homeland security in 2013. In those letters, he echoes concerns over the lack of cameras inside the garage, saying it's "not out of the realm of possibility for General Mitchell Airport to become a target for terror."

The response from Federal Security Director Louis A. Traverzo, states "I would agree with you, in that security in the parking structure could be improved, and the airport even had a design study with cost estimates done for a camera system that would probably exceed your recommendations."

The letter goes on to say: "Given the availability of funds, I believe it is more prudent to spend the money on hardening the terminal building first, and as funds become available in the future we can work our way out to the perimeter."

Airport officials declined to discuss specifics regarding how many cameras were inside or outside the parking garage, or where they were located.

However, they say over a million drivers use the parking structure each year, and that cases of vandalism and theft are extremely rare.

The Milwaukee County Sheriff’s Office (MCSO) spokesperson's comments give the public a misleading and inaccurate picture of security measures in the Airport’s parking garage.

Airport policy is to never discuss specifics about security measures or systems.  However, to set the record straight, there are functional security cameras and license plate readers located in and around the garage.  In addition, there are numerous other security measures, including random, unpredictable patrols performed by Sheriff’s Deputies, SP+ (the parking operator), Airport Operations, Airport Maintenance and other Airport employees.  These patrols are performed on foot as well as in marked and unmarked vehicles.

The Airport does not comment on Sheriff’s Office investigations, which is why media questions in this case were referred to MCSO.  We appreciate the key role MCSO played in apprehending the two suspects that were later charged in this case.  Airport parking employees were also diligent in providing information and clues that helped lead to the arrest.  It is our understanding that the individuals charged may be connected to a much larger spree of similar incidents throughout Milwaukee County.

Vandalism and theft are not common occurrences in Mitchell Airport’s parking facilities.  We maintain a high level of patrols and surveillance, and we continually review our security measures.  We remind drivers to not leave visible bags or valuable items in their cars, which is a good practice anywhere.

Hourly Parking and Daily Parking in the Airport parking structure are the closest and most convenient parking options.  More than 1 million drivers choose to park at Mitchell Airport each year.  Cases of vandalism or theft are very rare and isolated; travelers can feel confident about parking at Mitchell Airport.