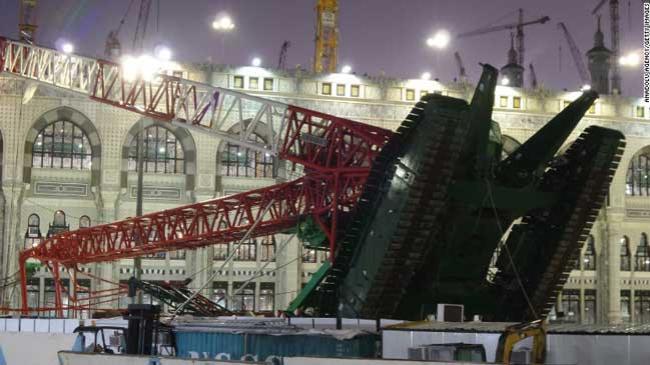 (CNN) A crane toppled over Friday evening at one of Islam's most important mosques -- Mecca's Masjid al-Haram, or Grand Mosque -- killing at least 87 people and injuring 201 others, Saudi Arabia's civil defense authorities said Friday on Twitter.

Severe storms and heavy rain caused the crane to fall, the directorate of the Saudi Civil Defense said via Twitter.

The Masjid al-Haram surrounds Islam's holiest site, the Kaaba -- a shrine that worshipers visit during the Hajj, the annual pilgrimage to Mecca.

Approximately 2 million people a year make the pilgrimage, which this year is due to begin around September 21.

Video shot at a distance from the collapse appeared to show debris and blood on the ground where the crane fell.

Another picture from the site showed what appeared to part of a crane on a floor, with debris strewn around it.

Khaled Al-Maeena, editor at large at the Saudi Gazette in Jeddah, said the incident happened during a strong thunderstorm.

\"The scene is of shock ... and people are wondering what happened,\" he said.

\"Many of the (Hajj pilgrims) go to Medina first. If this was one or two days before the actual Hajj ... I would have expected that the death toll and the injured and the casualties would have been much higher,\" Al Maeena said.

The Grand Mosque is no stranger to tragedies, often because of the crush of people in Mecca for Haj.

In 2006, a stampede killed at least 363 people. That stampede, like others in the past, happened during a stone-throwing ritual in which the pilgrims stone a symbolic devil.

Islam requires every Muslim who is physically and financially able, to make the journey to Mecca at least once in his/her life.

Hajj occurs two months and 10 days after Ramadan ends, during the Islamic month of Dhul-Hijjah.