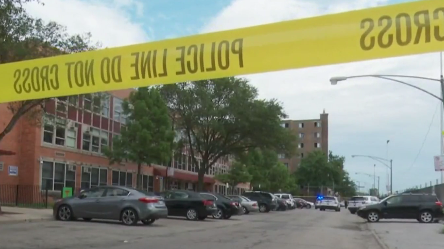 (CBS) —A 32-year-old woman pushing a stroller died after she was shot in the head Friday afternoon on Chicago’s South Side.

The incident occurred around 3:30 p.m. in the 6300 block of South Calumet. Police say the victim was pushing the stroller and walking with a man when two men approached them on foot.

When shots were fired at the man, the mother was hit in the head and arm by gunfire, police said. She was transported to Stroger Hospital, where she was pronounced, police said.

CBS 2 has learned the woman is a cousin of NBA star Dwyane Wade, who recently joined the Chicago Bulls.

A relative took custody of the woman’s child. Pastor Edward Jones says the victim had recently moved to that area of the city and had four children.

Police say they are questioning at least one person in connection with the incident.