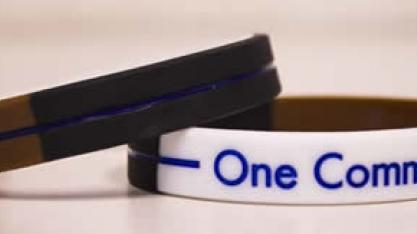 Distinctive wristbands emblazoned with the "One Community" motto are on sale locally to pay for mentor programs between local police and the children in the neighborhoods they patrol.

Cops and Kids Foundation President and Retired Officer Bob Kraemer acknowledged that this is an especially sensitive time.

"There's been a lot of tension between members of the community and law enforcement," Kraemer said Thursday at a press conference at the Pettit Center.

Kraemer says the programs allow officers to identify children who might be struggling or who need a role model.

There are three major programs:

Cops and Bobbers is designed to teach kids fishing.

"Maybe they get lucky catch a fish," explained City of Waukesha Police Sgt. Jerry Habanek. "Maybe it's a little fish, but to that kid, it's the biggest fish they've ever seen and its a police officer there to tell them congratulations."

Waukesha and Wauwatosa Police Departments says the programs have proven results. Now there are plans to expand them into Milwaukee.

"As a 25 year veteran," recalled MPD Captain Raymond Banks, "There's nothing better than a youth recognizing you on the street for something you did for them 22 years ago."

The Admirals will be treating the children to hockey games this season.

"We're grateful to Bob for all the hard work over the years, bringing this program forward and we're very honored to be part of it," added Jon Greenberg, President of the Milwaukee Admirals. "This is a program that was very easy for us to get behind."

One Community Wristbands are being sold at various sites from Waukesha State Bank Locations, Leff's Lucky Town and Johnsons Sporting Goods in Wauwatosa.