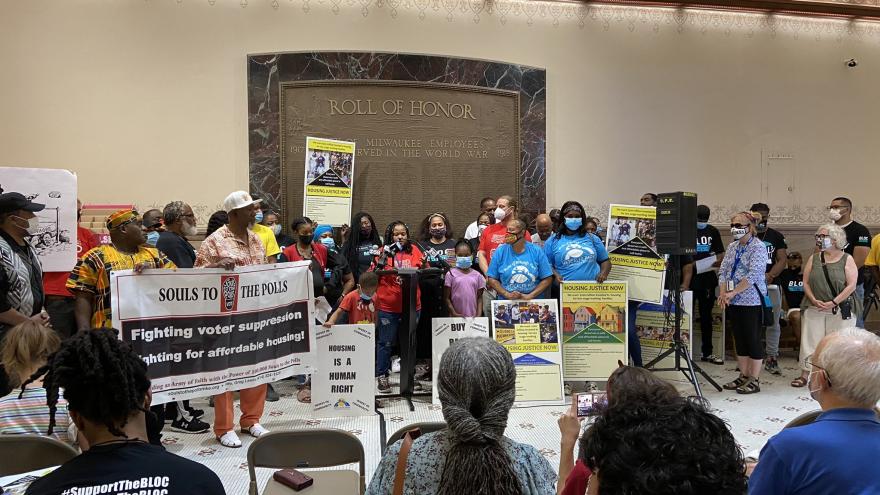 MILWAUKEE (CBS 58) -- Various community groups demanded city leaders to use federal funds to invest in efforts to grow affordable housing options in Milwaukee during an event at City Hall on Monday, July 26.

"We are demanding the people in this building, the Common Council, the mayor, actually invest into housing and understand how critical housing is and how it relates to so many other issues," Angela Lang, the executive director of Black Leaders Organizing for Communities said during a news conference. "That is why we are here."

Milwaukee is receiving almost $400 million in American Rescue Plan Act -- or ARPA -- funding. Community groups want the city to spend $200 million on the issue of affordable housing. Leaders called the influx of money a "once in a lifetime" opportunity to address housing in the city.

Mayor Tom Barrett earlier this month announced a plan to invest $30 million to address the issue, an amount some alders say is not enough.

"I think the [amount] in his plan was insufficient," Ald. JoCasta Zamarripa told CBS 58.

Zamarripa said she looks forward to following up with community groups and activists who support the $200 million figure. The eighth district alderwoman also wants to consider Ald. Bob Bauman's proposal which would invest $150 million on the issue.

"I do agree there has to be a catalytic investment here in housing to make sure we're addressing the housing shortage especially for our underrepresented communities and for our workforce here," Zamarripa said.

The Common Council's Finance and Personnel Committee will take up what plan to address housing using the ARPA funds in September, allowing members of the public to share input with city leaders.

A spokesperson for Mayor Tom Barrett sent CBS 58 this statement:

"Housing is a priority for the Mayor. No other category of funding has received more money than housing in the Mayor’s first allocation of ARPA funding. It is highly likely that additional funds will be included in the Mayor’s future funding rounds. I believe the county and the state are also considering housing funding."