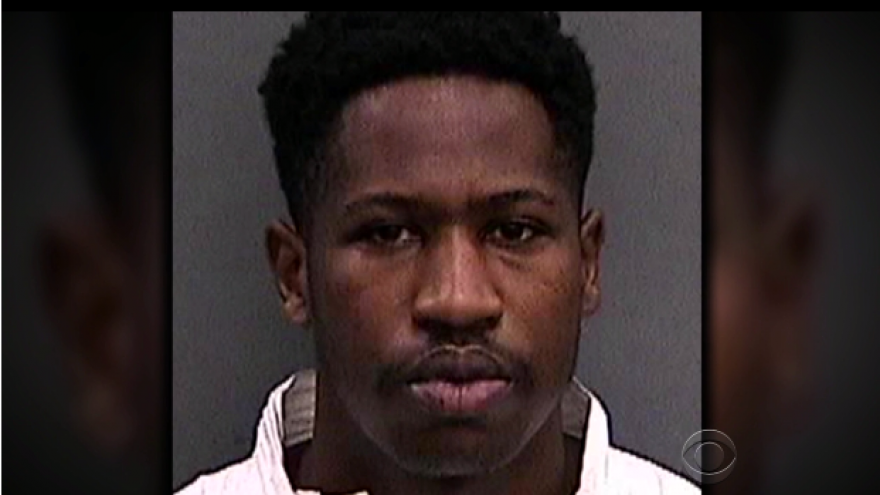 TAMPA -- (CBS) Co-workers at the Tampa-area McDonald's restaurant where the 24-year-old suspect in a string of deadly shootings worked say they teased him about his resemblance to the shadowy figure in surveillance video released weeks ago by police.

"We would tease him and say he was the killer, because he looked like the pictures," Gail Rogers, who has worked for four years at the Ybor City McDonalds, told the Tampa Bay Times.

"I called him the killer to his face," Rogers said. "He didn't like that."

Howell Emanuel Donaldson III was arrested Tuesday after he left a bag containing a loaded gun with a co-worker Tuesday afternoon, and the manager contacted a police officer. Tampa police chief Brian Dugan said the same gun was used in all four Seminole Heights slayings in October and November.

Tampa police released surveillance footage in October that showed a man wearing a hoodie walking in the Tampa neighborhood where a victim was shot. Dugan said investigators recovered a jacket and hoodie in Donaldson's car that appeared to match those worn by the suspect seen in publicly released surveillance video. He said it's not yet clear that they are the same garments, but implied they were, saying, "if it walks like a duck."

Donaldson was ordered held without bond during a first court appearance Thursday morning. He stood silently as Tampa Judge Margaret R. Taylor discussed the charges with his attorneys and prosecutors.

The tip about the gun was "what we needed," Dugan said, the crucial clue that definitively linked the four slayings that have terrorized the city for weeks. Dugan said the weapon provided the probable cause to arrest Donaldson, who faces four counts of first-degree, pre-meditated murder.

Dugan said Donaldson admitted owning the gun, but did not confess to the four seemingly random killings of Benjamin Edward Mitchell, Monica Caridad Hoffa, Anthony Naiboa and Ronald Felton. Mitchell, 22, became the first victim on Oct. 9. Two days after Mitchell was shot, Hoffa, 32, was gunned down. On Oct. 19, Naiboa, 20, was shot after taking the wrong bus home from his new job.

All of the October victims were either getting on or off a city bus, or were at a bus stop when they were shot, police said. Police found the body of Felton, 60, in the street on Nov. 14. Police said Felton had been walking across the street to meet someone when the gunman came up behind him and fired.

Donaldson appeared in court Wednesday via video from the Hillsborough County Jail. He was shackled and wore a sleeveless, blue padded anti-suicide vest. Two bailiffs held him by the arms during the hearing. He didn't speak to the judge.

Taylor set a Tuesday hearing to determine whether he will be held without bond until his trial.

Family members of the victims, some wearing Seminole Heights shirts, watched from the courtroom.

The family of Monica Hoffa, the second victim, gathered in the court room to look on. Hoffa's father, Kenny Hoffa, drove to Tampa from his home in South Carolina as soon as he got word of the arrest.

"I'm praying for his family," Kenny Hoffa, the father of victim Monica Hoffa, told the Tampa Bay times. "I know they're experiencing everything we're experiencing … Unfortunately, they're going to suffer the loss of a son, like we lost a daughter. It's a tragedy all the way around."

Hillsborough State Attorney Andrew Warren reportedly spoke to the media after the hearing, vowing to prosecute Donaldson to the fullest extent of the law, which may include pursuing the death penalty.

"The death penalty should be reserved for the worst of the worst," Warren told the Tampa Bay Times, "and, generally speaking, a serial killer would qualify."

Warren said he expects to bring formal charges before a grand jury for an indictment.

The arrest brought immense relief to the Seminole Heights neighborhood, where many outdoor activities had stopped since the first death Oct. 9. Two more fatal shootings happened in the weeks that followed, and residents were so scared that police escorted children while they trick-or-treated.

"Relief. Sadness. I think it's a slew of emotions," said Brittany Lott, who said she hasn't walked her dogs in 51 days, choosing to spend time in the backyard instead.

CBS News correspondent Manuel Bojorquez reports that Donaldson is from the Tampa area, but also has connections to New York. Donaldson graduated from St. Johns University in New York in January 2017, according to school spokesman Brian Browne. He was a walk-on for the men's basketball team during the 2011-12 season, but never played in a game, Browne said.

Donaldson's neighbors said Wednesday that they'd recently seen him playing basketball with his younger brother in the suburban driveway of the family's brick home. Now they're watching news of him on television, puzzled as to how a kid who went to college in New York on a basketball scholarship ended up behind bars.

"He's very nice, he waves, very polite," said neighbor Kelly Fabian, who said she walked Donaldson to school when he was younger. "Quiet kid. It's a shocker."

New York City police say they'd like to examine ballistics results of the gun used in the Florida killings to see if the weapon matches any unsolved crimes in New York. Police in New York said he had been arrested in 2014 for a minor crime, but the arrest was sealed.

Donaldson did not live in the Seminole Heights neighborhood where the shootings occurred and the police said authorities have not been able to determine why Donaldson chose the area. Dugan said Donaldson has been cooperative and friendly to officers, but hasn't shed any light on why he committed the crimes or how he picked the victims.

After graduating from college, Donaldson worked in customer support at the Ultimate Medical Academy, a school that trains workers for health care jobs. He started there in February and worked for about three months before he was fired for absenteeism. The academy said he passed a background check before he was hired.