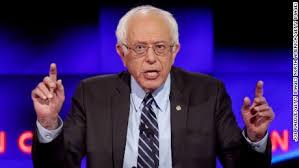 (CNN) Hillary Clinton and Bernie Sanders confronted issues of race Tuesday at a CNN town hall four days ahead of the South Carolina Democratic primary in which African-American voters will play a crucial role.

Sanders accused Republican presidential front-runner Donald Trump and others of fomenting a "racist effort" to delegitimize President Barack Obama. Sanders portrayed the "birther" controversy that Trump pushed during Obama's first term as part of a Republican strategy to thwart his presidency, based on the mantra "obstruct, obstruct, obstruct."

"We have been dealing in the last seven years with an unprecedented level of obstructionism against President Obama," Sanders said.

Sanders has been criticized by Clinton in recent debates and town halls for not being sufficiently supportive of the President, who remains popular among many Democrats, especially African-Americans. Sanders is under pressure to improve his standing among minorities before South Carolina's primary and the string of Southern contests that follow on March 1, which could tilt the momentum of the Democratic White House race toward Clinton.

The forum highlighted the very different tone Clinton and Sanders take to address race. Sanders called for reforms in the criminal justice system and promised to hike funding for historically black colleges and universities if he is elected president.

Clinton responded in more personal terms, saying that white people should be honest and recognize "that our experiences may not equip us to understand what a lot of our African-American fellow citizens go through every single day."

She said there were real racial barriers that "we need to be honest about." Clinton asked a group of African-American women in the audience who had lost children to police action and random gun violence to stand and be recognized.

Clinton is counting on a strong showing in Southern states likely to showcase her dominance among African-American voters, putting the onus on Sanders to try to broaden his support or face falling behind. The Vermont senator clearly appreciates the urgency and is taking an increasingly tough line against the former secretary of state.

He opened the town hall by reiterating his call for Clinton to release transcripts of paid speeches that she made to Wall Street banks after she left the State Department.

"I am happy to release all of my paid speeches to Wall Street -- here it is," Sanders said, with a wave of his hands. "There ain't none."

Clinton, who appeared on stage after Sanders, sidestepped questions about the senator's call for her to release her speeches.

"If everybody does it, and that includes the Republicans -- because we know they have made a lot of speeches," Clinton said.

She said the real issue was about who had the best plan to crack down on Wall Street.