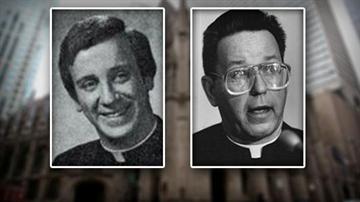 Chicago--  Six months after the Milwaukee Archdiocese released documents on clergy abuse, catholic leaders in Chicago followed suit Tuesday.  Four of the priests named have ties to Wisconsin.  The Archdiocese of Chicago released six-thousand pages of documents related to the way it dealt with 30 priests including Rev. Vincent McCaffrey who molested boys at a Wisconsin cabin he owned with four other priests.  Also identified today, Defrocked priest Norbert Maday, now a registered sex offender after serving twenty years in prison for sexually abusing two teenage boys during a church outing to Oshkosh.  Other abusive priests with Wisconsin ties include Rev. Raymond Skriba, and the late Rev. Donald Ulatowski.   \"These files here represent a lot for us survivors. For some of us, it will be answers. For some of us, it will be peace of mind. For some of us, it's wanting to know, but for all of us, it's a start,\" said Angel Santiago, one of the clergy sex abuse victims who spoke during today's news conference organized by the Minneapolis law firm representing them.   95 percent of the incidents happened before 1988.  All but two of those named are no longer priests.  The Archdiocese of Chicago has posted an apology on its website.