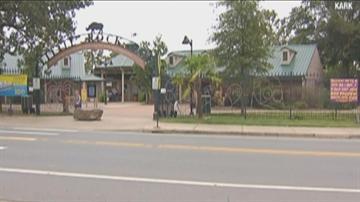 (CNN) -- A child remains in critical condition after surviving a fall into a jaguar exhibit at the Little Rock Zoo in Arkansas on Friday.

Witnesses say screams for help rang out loudly after the 3-year-old boy slipped through the exhibit rail feet first, plummeting into the cat pit, according to a Little Rock police report.

The child was with his father and grandfather at the time of the incident. The father of the child told Little Rock police he was leaning over the rail in an attempt to take a photograph of the animals and observed his son's feet go over the rail out of his peripheral vision. The child's grandfather says the little boy fell approximately 15-16 feet, police said.

Two jaguars in the enclosure attacked the toddler. \"The black cat had bit the child on the foot area and the yellow jaguar had bit the clothing near the neck area,\" read the police report, quoting the grandfather.

Fire extinguishers were used to ward off the big cats in the exhibit, while a zookeeper lowered a ladder, climbed into the cat pit and retrieved the child, according to a statement released by the zoo.

Zookeepers said the rescued child was conscious and responding. The toddler was rushed to Arkansas Children's Hospital.

\"The child's condition is critical,\" said Dan McFadden, director of communications for the hospital. \"We respect the wishes of the child's guardian who asked that the child's name and any additional information not be shared at this time.\"

Though doctors say the wounds are not life-threatening, the toddler had an extensive scalp laceration, a depressed skull fracture and minor puncture wounds, according to the police report.

\"Our thoughts and prayers are with the child and the family. The safety of our citizens is of paramount value and our staff followed training procedures on rescuing the child and were able to respond quickly and efficiently and work with emergency personnel, said Bruce Moore, Little Rock city manager, in a statement.

City officials said a full investigation into the incident is being conducted.