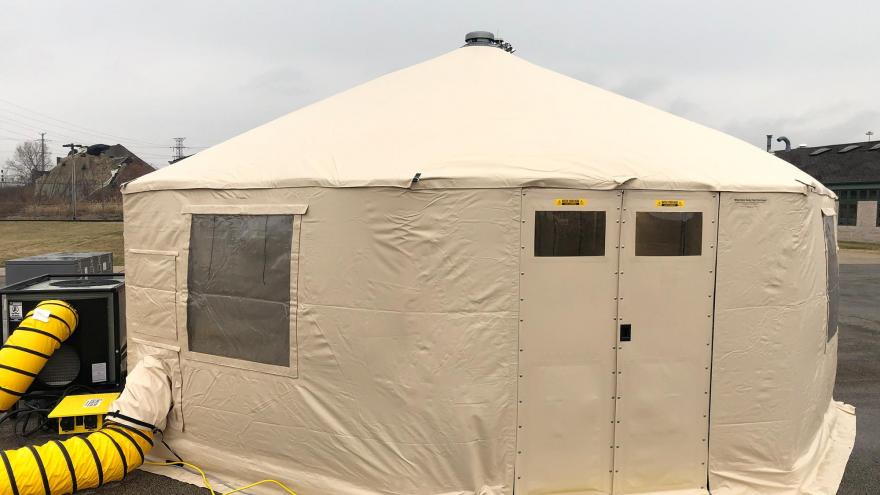 Patients who might have coronavirus are triaged and evaluated by medical professionals in these tents.

(CNN) -- Chicago's Cook County Jail once had a population of roughly 10,000 detainees and was often cited for overcrowding.

Now that number is down to around 4,200, an all-time low, according to the Cook County Sheriff's Office. One significant reason is the ongoing coronavirus pandemic.

Years of reform, including changes in bail requirements, cut the jail's initial population swell almost entirely in half.

Then, in the past month alone, another 1,300 inmates have been released as the offices of the Cook County Sheriff, Public Defender and State's Attorney focused on releasing those awaiting trial and low-level nonviolent offenders.

"On cases we agree on, we've gone into court together and asked for a release. On cases where we disagree, we go before a judge and present our evidence for the courts," said Cook County State's Attorney Kim Foxx. "We've been able to reduce the jail population in the course of four weeks by almost 25 percent."

It's among the many tactics the largest single-site jail in the US has been pushed to explore as population control became increasingly significant amid the ongoing pandemic.

"We want to make sure that we're creating conditions whereby people who don't need to be there aren't there and the people who are there have optimal conditions for their health and safety," Foxx said.

High risk for spread with nowhere to go

The coronavirus pandemic has been hard on jails around the country but especially so on Cook County's. Their confirmed coronavirus cases grew from just a few in late March to a number in the hundreds by the beginning of April. At one point it was the largest known source for coronavirus infections in the country.

In a statement, Cook County Health wrote to CNN, "Controlling the spread in a jail or other residential facility poses unique challenges."

The statement continued, "Many of our patients arrive at the jail with pre-existing conditions. Many have multiple conditions. And many of them are over the age of 60."

While more than 150 detainees are recovering after previous positive diagnoses, at least three detainees have died after testing positive for Covid-19. The pandemic has meant re-evaluating health practices as part of a process the Sheriff's Office said began back in January.

"Hundreds of gallons of bleach and disinfectant is distributed throughout the jail weekly as well as masks and other protective gear," wrote the Cook County Sheriff's Office to CNN in a statement. "We've proactively single celled the majority of the jail population and maximized social distancing to the extent it is possible in a correctional facility, including preparing and opening previously closed detention areas."

A recent federal court order also required the Sheriff's Office to provide masks to all detainees who were quarantined, starting on April 12.

"Now for the people who are not infected, how do we make sure that we keep maintaining that?" asked Sheriff Tom Dart in a previous interview with CNN. "Boy that's tricky."

Among their solutions, creating a quarantine bootcamp at a separate site where those that are infected, or suspected to be, are taken to stay separately from the jail's general population.

Chicago's population is only 30% black, but blacks make up 75% of the jail population and 60% of all coronavirus deaths in the city,

While Chicago's population is 30% black, black Chicagoans make up 75% of the jail population and 60% of all coronavirus deaths in the city.

The outbreak at the jail adds to an alarmingly fast-growing reality.

"These are the exact same populations that have been hardest hit by gun violence and hardest hit by the war on drugs and make up the overwhelming population of the people who utilize our criminal justice system," said Foxx.

It's part of why Chicago's Department of Public Health put in place an order to enhance the data sharing between hospitals in the city to include demographics, in an attempt to better understand the true scope of the pandemic's ongoing devastation.