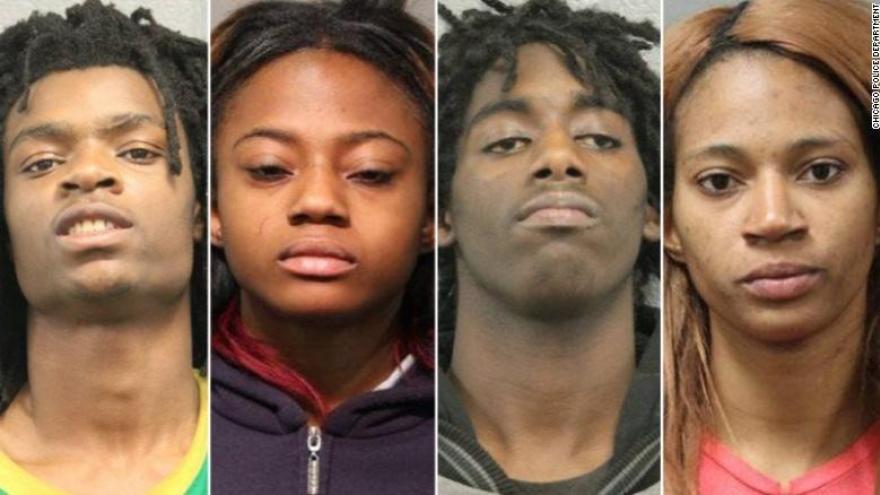 (CNN)Four suspects have been charged in connection with the attack on a special-needs teen that was streamed on Facebook Live.

Jordan Hill, 18; Tesfaye Cooper; 18; Brittany Covington, 18; and Tanishia Covington, 24, have each been charged with a hate crime, felony aggravated kidnapping, aggravated unlawful restraint and aggravated battery with a deadly weapon.
Hill, Cooper and Brittany Covington also face charges of residential burglary. Hill also faces charges of possession of a stolen motor vehicle.
Video of the torture has stunned the country, not just because of the graphic abuse, but because of the comments made by some of the assailants.
"*F*ck Donald Trump!" one attacker shouted in the video. "F*ck white people!"
The teen was tied up for four or five hours, Cmdr. Kevin Duffin of the Chicago Police Department told reporters.
Duffin said the department sought hate crime charges because of the victim's diminished mental capacity, the fact that the four suspects tied him up and the racial epithets heard on the video. The victim apparently is white; the suspects are African-American.
The suspects will appear in court Friday.
Video of the attack shows the 18-year-old victim cowering in acorner of a room, tied up with his mouth bound in plastic. His eyes exude fear as his attackers get ready for their next act.
One assailant slashes his sweatshirt with a knife. The young woman streaming the abuse on Facebook Live repeatedly turns the camera back to herself.
An attacker then takes a knife to the victim's head, carving a patch off his scalp.
For the next 25 minutes, the abuse continues for the world to see. The victim is repeatedly kicked and punched, but his screams are apparently ignored.
The young woman broadcasting the attack appears dismayed that she's not getting more attention online.
"Y'all not even commenting on my s***," she tells a friend during the live stream.
The attackers in the video are black, and the victim is white.
Many who saw the video have blamed the Black Lives Matter movement. Within 24 hours, the hashtag #BLMKidnapping was mentioned more than 480,000 times on Twitter.
But on Thursday, police said they have not seen any connection to the Black Lives Matter activist group, contrary to some reports on social media.
Neither the Black Lives Matter national organization nor its Chicago chapter responded to CNN's request for comment Thursday.
But DeRay Mckesson, a longtime Black Lives Matter supporter, said those linking the attack to the movement don't have their facts straight.
"It goes without saying that the actions being branded by the far-right as the "BLM Kidnapping" have nothing to do w/ the movement," he tweeted.
And a former Chicago police officer Dimitri Roberts slammed the notion that the Black Lives Matter movement is to blame.
"This is hate. And hate doesn't have a color," Roberts said. "So for folks to talk about this is somehow connected to Black Lives Matter is absolutely the wrong way to look at this. ... And we cannot respond to hate with hate. It's just going to perpetuate the cycle."
According to the city of Chicago's website, "Hate crimes are acts of bigotry, and are committed because of the intended victim's actual or perceived ancestry, color, creed, gender, race, religion, sexual orientation, physical or mental disability (including HIV status), or national origin. Hate crimes not only harm the victim, but also the group in which the targeted member belongs."
And according to Illinois law, hate can be considered an aggravating factor in a criminal charge and can result in a more severe sentence.
The assailants made a wide array of statements in the video, including repeated references to Donald Trump, white people in general and the victim's appearance.
The victim's parents reported him missing Monday, telling police they had not heard from their son since dropping him off Saturday at a McDonald's in the Chicago suburb of Streamwood.
The victim knew at least one of his accused attackers from school, Duffin said. Though he may have voluntarily gotten into a van with the group, police are considering kidnapping charges.
Police in Streamwood said that after the man was reported missing, his parents began getting text messages from someone "claiming to be holding him captive."
Officers investigating the texts "discovered a Facebook video depicting (the man) being verbally and physically abused." It's unclear what alerted the police to check Facebook.
Soon after they discovered the video, Streamwood investigators said they were contacted by Chicago police, who said they had found the missing man.
On Tuesday, Chicago officers responded to a battery call at a home in the area where the victim had been found. There were signs of a struggle and property damage, police said. Police have not identified the person who made the call.
After viewing the Facebook video, they determined the victim was the man found on the street -- and the people arrested were involved, police said.
Police said the victim might have been with the suspects for at least 24 hours.
Facebook said it pulled the original video from a suspect's Facebook profile.
"We do not allow people to celebrate or glorify crimes on Facebook and have removed the original video for this reason. In many instances, though, when people share this type of content, they are doing so to condemn violence or raise awareness about it. In that case, the video would be allowed."
According to its community standards, the company removes content, disables accounts and works with law enforcement in cases of a genuine risk of physical harm or direct threats to public safety.
Facebook users also can report offensive material to the social platform. If a live stream starts blowing up, Facebook staffers monitor it for possible violations and interrupt it if needed.
Share this article: