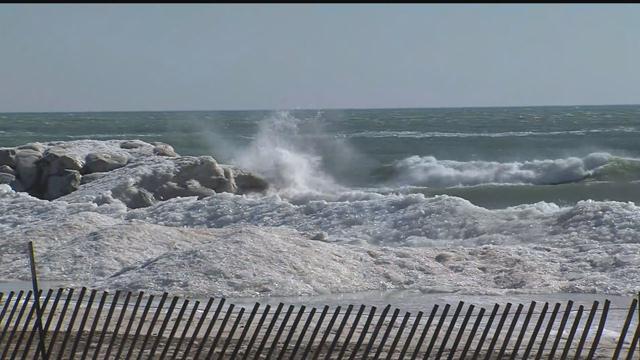 (CBS CHICAGO) Chicago firefighters suspended their search after one hour for a teenager who was swept into Lake Michigan on Thursday, according to CBS Chicago.

A large wave crashed ashore at Diversey Harbor causing the teenager to be swept into Lake Michigan.

Fire Department said to CBS Chicago said two friends were walking along the lakefront at Diversey Harbor when a large wave swept an 18-year-old male into the water.

The victim’s friend tried to help him out of the water, but was unable to do so.

The search was suspended due to severe turbulence.

Coast Guard search and rescue experts in Milwaukee are asking lake front wave watchers to exercise caution when observing the weather near the water.

While docks, breakwalls, piers and rocks are seemingly ideal places to take pictures or video of storms, members of Coast Guard Sector Lake Michigan and its sub units on the lake have already responded to numerous cases of people swept off a wall or pier by rough waves.

With winds gusting up to 30 miles per hour and waves up to 10 feet, Coast Guard search and rescue experts suggest safer alternatives when viewing the wild waves of Lake Michigan.  There are numerous cameras around Lake Michigan that offer online video feeds of the beaches and piers.  Local lakefront parks or parking lots often offer safe vantage points.   For those willing to brave the weather, the Coast Guard urges people to stay a safe distance, approximately 25 feet from the water, especially in areas near breaking waves.

“Wearing a life jacket or having a floatation device is always advised when near the water,” said Cmdr. Leanne Lusk, Coast Guard Sector Lake Michigan’s chief of response. “It’s helpful to make sure someone knows where you are going and when you plan on being back.”