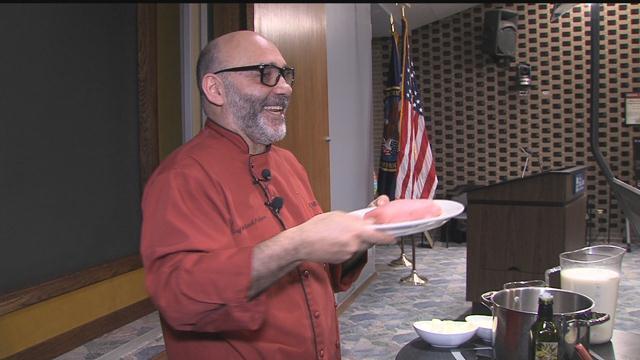 On Tuesday we saw a a side of the gregarious Chef Michael Feker that we've never seen before.

While speaking to Veterans and workers at the Zablocki V.A. Medical Center, the restaurant owner was brought to tears when speaking out about his call to serve by forming a non-profit aimed at bringing the culinary arts to service men and women.

"I never thought, in my wildest dreams, that I would be standing in front of these flags and talking to you," said Feker who came to this country after the Iranian revolution in 1979.

Business interests would bring him to Wisconsin and love would keep him here, eventually becoming an official citizen.

"I fell in love with a beautiful woman and the rest in history," Feker explained.

He was the keynote speaker at a ceremony dedicated to the memory of Martin Luther King, Jr., one day after the official holiday.

Feker says he's often reminded of Dr. King's own writing in asking us all what we have done for others.

"He did with love and changed the conversation we were having about ourselves as people," recalls Feker.

Among those in the crowd for Feker's speech and cooking demonstration was Veteran George Toeller.

"I met Martin Luther King when I was out of the service," Toeller told CBS 58 News. "When he was killed, I felt bad."

Kimberly Bell, a Veteran's assistant, says she was impressed with the turnout.

"A lot of people came," observed Bell.  "It was interesting. I'm glad to be here."

The V.A. also gave Feker a special plaque of appreciation for his outreach to Veterans.