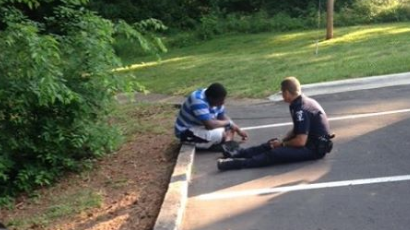 CHARLOTTE, NC (WBTV) – A post about a Charlotte-Mecklenburg Police Department officer has gone viral after he reportedly helped a high school student who has autism.

According to CMPD’s Facebook page, Officer Tim Purdy was dispatched to a situation involving the young man who left his school’s campus and may have been suicidal.

Officers say the teen had a history of displaying violent behavior due to his neuro-developmental disorder.

“In order to build a connection with the young man, Officer Purdy sat next to him on the ground, talked things through and even got him laughing,” the Facebook post said.

Purdy was able to establish trust with the young man and officers were able to get him the help that he needed.