Change is rolling in: Bradford beach to become wheelchair accessible 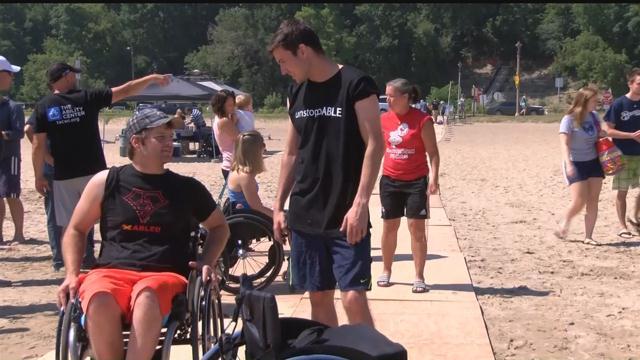 On a beautiful summer day, the beach is where most people want to be, but that can be a challenge for people with limited mobility.

Before Saturday, Bradford beach did not have a ramp. That meant no way for people in wheelchairs or who have special needs to hit the beach.
While the ramp installed Saturday was temporary, officials say they hope its the start of movement to make parks more accessible.

\"For two years we've been wanting to come and try to make this work. And we've attempted it a couple times only to get just past the walking path,\" said Jordan Wilkens.

The struggle is a  reality for Wilkens who was able to enjoy Bradford beach with his girlfriend for the first time Saturday thanks to a temporary ramp.

\"I get to be part of a beach volleyball game, I can go down to the water and get blasted with crazy cold water, I can move and be part of everything and its been really fun,\" he said.

Saturday's event was about raising awareness of the need for ramps at parks.

\"One here at Bradford and then transition to Veteran's and then Red Arrow Park,\" said Dargle.

Its the brain child of the Ability Center's founder, Damian Buchman who says the ramps can be used and enjoyed by all.

\"People with coolers, moms with strollers, people on bikes; the reality is access works for everybody not just people with disabilities,\" he said.

There's no set date yet of when the project will be started but Dargle says its just the start of a movement in Milwaukee.

\"For me as an able-bodied person to see how I've taken this for granted, its really opened my eyes to hey we need to do more as a system and as a county provide the ability to enjoy the parks,\" he said.