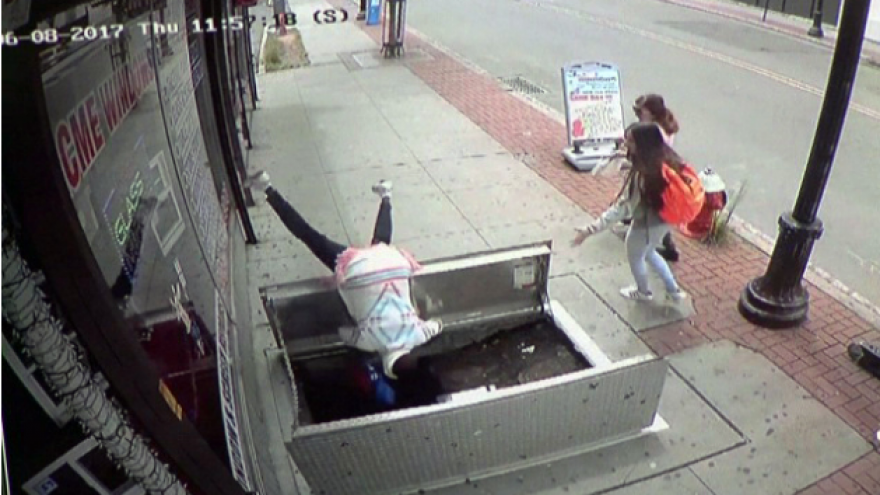 PLAINFIELD, N.J. (CBSNewYork) – In an accident many people have probably had nightmares about, a woman walking down a Plainfield, New Jersey street tripped over an open cellar door and tumbled into a basement Thursday.

As CBS2’s Andrea Grymes reported, the 67-year-old woman was looking at her cellphone when she flipped right over one of the doors – leaving her with serious injuries.

Surveillance video showed a PSE&G crew going downstairs through the cellar doors to do some work. Minutes later, the woman appears down the block – walking straight toward the cellar.

Right before she gets to the open door, the woman looks at her phone – and flips head first into the basement about six feet below.

Two stunned passersby appear in the frame, while the workers in the cellar rush toward the woman.

Others on the block quickly came to look – including a police officer who happened to be across the street.

Patricio Romero works in a shop just feet away.

“Somebody was telling me I was, ‘Oh my God, unbelievable, you know,’” Romero said. “It’s something that could happen at any minute, because everybody’s texting.”

The accident happened around noon, right in front of Acme Windows on Somerset Street in Plainfield.

Moments later, fire crews arrived and rescued the woman – pulling her out of the basement on a stretcher.

The woman was taken to an area hospital with serious injuries.