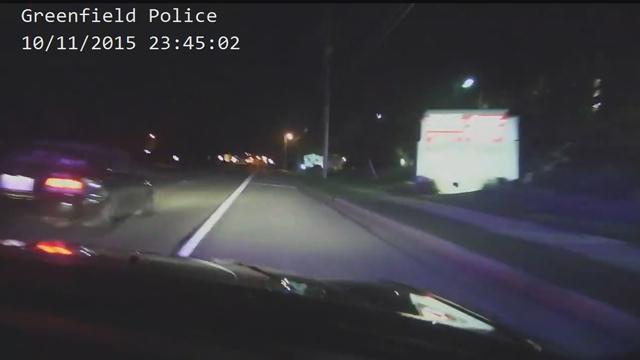 Speeding down a residential street on South 43rd in Greenfield is where the police pursuit begins.

The officer is chasing a man in stolen car.

"He's wanted for questioning for burglaries in Oshkosh along with the car theft that happened there," said Capt. Michael Brunner.

But the suspect soon runs out of road.

"That's when he drove across the grass to get back on Loomis Road and ended up driving the wrong way on West Loomis Road," Capt. Brunner said.

The officer gets help from fellow squads to speed through the intersection of Loomis and Layton. The suspect car then re-appears in the video, tearing through the median, narrowly missing another car.

In seconds, the officer catches up to the car, pulls next to it and runs into it. The suspect car spins out. It's called the Pursuit Intervention Technique or PIT.

"It usually works quiet well," said Capt. Brunner.
He said the PIT is a controlled maneuver used to end police pursuits quickly and safely. All Greenfield police officers are trained how and when to use it.

"They are looking for areas where there's no vehicle traffic, pedestrian traffic," he said.

After the PIT technique in this case, the suspect runs from the stalled car. At the scene, tire tracks in the grass are still visible in daylight.

The mile-long chase ends with the suspect behind bars, but if it weren't for technology, he may have gotten away.

"That particular squad car has a license plate reader camera set up on it," said Capt. Brunner. "Through that camera system, it read the license plate and alerted the officer that the vehicle was stolen."

The 40-year-old suspect from Fond du Lac is awaiting charges. His passenger, a 42-year-old woman, is also in custody for drug possession.