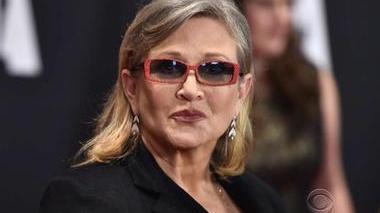 Carrie Fisher, who was born to Hollywood stars Debbie Reynolds and Eddie Fisher but became famous in her own right as Princess Leia in the original “Star Wars” trilogy, died days after suffering from cardiac arrest aboard a flight. She was 60.

Her family released a statement Tuesday saying: “It is with a very deep sadness that Billie Lourd confirms that her beloved mother Carrie Fisher passed away at 8:55 this morning. She was loved by the world and she will be missed profoundly.”

Fisher fell ill Friday on a flight from London to Los Angeles and was rushed to the hospital. Emergency workers who met the plane said she was unresponsive. Several people who were on the flight tweeted that they saw her receive CPR from passengers who may have been nurses. The plane was then met by paramedics at LAX who provided advanced life support.

The oldest child of actress Debbie Reynolds and singer Eddie Fisher, her family was shadowed by scandal when she was just 2 years old – when her father left her mother for Elizabeth Taylor.

“I am truly a product of Hollywood inbreeding,” Fisher wrote in her 2008 autobiography “Wishful Drinking.” “When two celebrities mate, someone like me is the result.”

Fisher made her film debut as a precocious teen in 1975’s “Shampoo,” starring Warren Beatty, Julie Christie and Goldie Hawn.

But her big break came just two years later, when she starred as Princess Leia in the original “Star Wars” trilogy. Fisher revealed earlier this year that she and co-star Harrison Ford had a three-month affair while filming the first film, when she was just 19 years old and he was 33 years old -- and married with two children. “It was Han and Leia during the week, and Carrie and Harrison during the weekend,” she said in her 2016 memoir “The Princess Diarist.”

The scene in “The Return of the Jedi” where she wore a gold metal bikini as a sex slave became one of the most famous pop-culture moments of a generation. She told Rolling Stone in 1983 that the films are “basically boys’ fantasies.”

“Nearly naked, which is not a style choice for me,” Fisher said of the bikini in an interview with NPR earlier this year. “It wasn’t my choice. When [director George Lucas] showed me the outfit, I thought he was kidding and it made me very nervous. I had to sit very straight because I couldn’t have lines on my sides, like little creases. No creases were allowed, so I had to sit very, very rigid straight … What redeems it is I get to kill him, which was so enjoyable. ... I sawed his neck off with that chain that I killed him with. I really relished that because I hated wearing that outfit and sitting there rigid straight, and I couldn’t wait to kill him.”

After “The Return of the Jedi” in 1983, Fisher struggled with alcoholism, drug use and mental illness. She wrote in her memoir  “The Princess Diarist” that she was first introduced to drugs at age 13. Fisher started dating singer Paul Simon while filming “Star Wars” in 1977, and they married in 1983 at their apartment in New York City. They divorced after just one year, but they continued to date on and off for a decade afterward.

In 1987, she published her first book, “Postcards from the Edge” -- a thinly-veiled fictionalized telling of her drug use, time in rehab and her relationship with her mother. The book was turned into a film with the same name, starring Shirley MacLaine as Debbie and Meryl Streep as Fisher in 1990.

She told CBS News in 2004 that writing had become her passion.  On her website, Fisher is credited as “one of the top script doctors in Hollywood” for polishing screenplays from 1991 to 2005.

“Everything worked out very well in books,” Fisher told “CBS This Morning.” “[It’s] much more organized and ordered than everything out here.”

Fisher wrote six more books – “Delusions of Grandma,” “Surrender the Pink,” “The Best Awful,” “Wishful Drinking,” which she adapted from her one-woman show, “Shockaholic,” and the “The Princess Diarist.”

Fisher and Hollywood power agent Bryan Lourd were in a relationship in the 1990s and had a daughter, but Lourd eventually left her for a man. She described the situation as “humiliating,” although she said they kept a civil relationship for the sake of their daughter, Billie.

“I wanted Billie to see we could be friends, because I never had that with my own parents. I’m glad I got Billie a good dad; he’s everything my father wasn’t – including gay!” Fisher said in  2011.

Fisher has long been open about living with bipolar disorder. In 2005, she told CBS’ “The Early Show” she was diagnosed early in her life. “I had a shrink say to me … ‘Did you forget to tell me that you were hyperactive as a child?’ Slipped my mind after four years. But Billie does not have any signs of having this thing. My father was one of four children and the only one that, you know, was lucky enough to have won the sweepstakes.”

Fisher remained on the stage throughout the years. She performed “Wishful Drinking” as a one-woman show from 2006-07, and it later became an HBO special in 2010.  Fisher appeared in several films since “Star Wars,” including roles in “Hannah and Her Sisters,” “When Harry Met Sally,” “Sex and the City” and a cameo in “Austin Powers: International Man of Mystery.”

In 2015, she and the other original stars of “Star Wars” reprised their roles in “The Force Awakens.”

Fisher told CBS in 2004 that the way she told her life story “better be funny.”

“If my life wasn’t funny,” she said, “it would just be true and that’s unacceptable.”