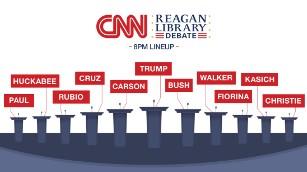 (CNN)The stage is set for the CNN Reagan Library Debate next week in California, with Carly Fiorina joining 10 other leading Republican presidential candidates at 8 p.m. ET.

Thursday marked the close of the two-month window for determining eligibility based on averages of national polls. The results were based on 14 polls including interviews with more than 6,000 potential Republican primary voters. The top 10 candidates overall -- plus Fiorina, whose average support places her within the top 10 in polls conducted after the first debate held August 6 -- have all qualified for the 8:00 p.m. debate next Wednesday in Simi Valley. The remaining five candidates will appear during an earlier debate beginning at 6:00 p.m.