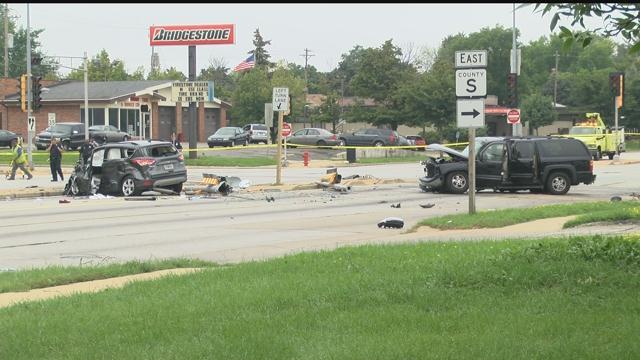 Three people are in the hospital after a serious crash on Milwaukee's northwest side. Milwaukee Police responded to the crash at 7:40 AM in the 7600 block of West Mill Road.

An eastbound 2016 Ford Focus operating at a high rate of speed went through a solid red light at North 76th Street and collided with a southbound 2002 Chevy Suburban. The suburban then veered into a 2009 Volkswagen Jetta.

CBS 58 spoke with some people, who said it's the worst crash they've ever seen.

Cars mangled, stoplights and signs damaged. That was the aftermath, after cars collided at the intersection of 76th and Mill road.

"That Toyota car, he had the right of way. He was making a left to go west. And the guy ran the stoplight. To car west up beside him and everything started flipping and spinning around.  Then that black truck hit that white car and next thing you know when we got out and ran back a body was laying in the ground," said Owens.

Two of the three occupants of the Focus, 18 and 19-year-old men suffered serious injuries and are currently being treated at a local hospital. The third male occupant of the Focus fled the scene prior to the arrival of first responders.

Larry Bryant was stuck in the traffic back-ups. He said he's never seen a crash that bad.

"All this needs to stop. It's getting kind of dangerous in Milwaukee now. I'm even afraid to drive my car at night."

After seeing the crash happen, Owens said things may not be quite the same.

"This will be an intersection that I will always look at differently."

The Ford Focus was reported stolen from Waukesha on August 16, 2016, the 18-year-old driver of the Focus has an arrest history for auto theft and armed robbery. The 19-year-old passenger was being sought for questioning in regards to another armed robbery, both are currently in custody.