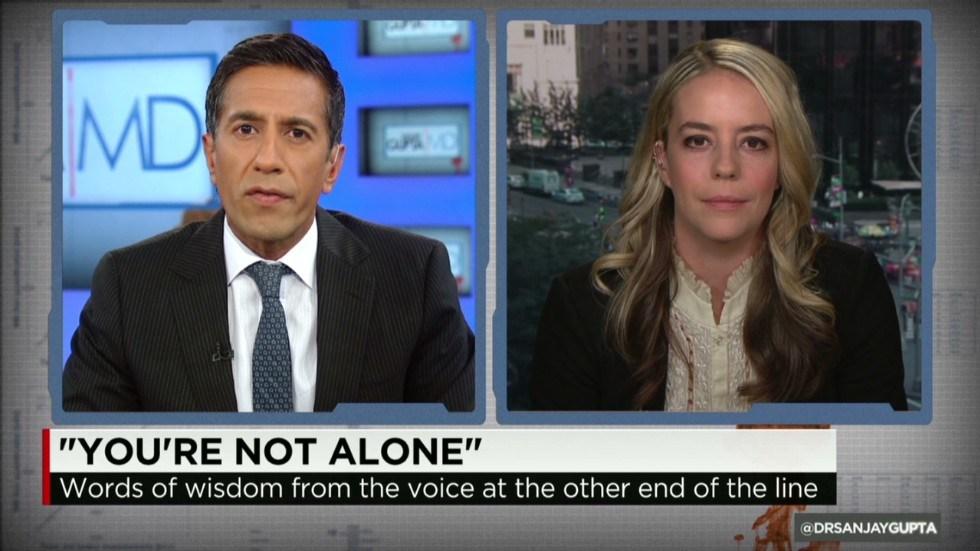 (CNN) -- In the wee hours of November 9, when the US presidential race approached its stunning end, John Draper and those he works with saw a different surprising result. The phone lines at the National Suicide Prevention Lifeline lit up in a way not seen before.

Between 1 and 2 a.m. alone, Draper said, the national network fielded 660 calls. The volume was two to three times what it had been, and that was on a night when calls were already on a dramatic upswing, increasing as polls closed and returns came in, the lifeline's director said.

It's a trend that's played out with other services too, and the direct link to the election was "pretty undeniable," said Draper, who's spent about 25 years working in the suicide prevention and crisis intervention field. "I can't say I've seen anything like this. ... And it's certainly not something I've ever seen in an election."

He saw a spike in calls after the September 11 terrorist attacks, when he ran a New York City hotline. But not since comedian and actor Robin Williams killed himself in 2014 has this national lifeline, established in 2005, seen such a surge. That dramatic uptick (much bigger than after the election) was tied to the media's steady and pervasive promotion of the lifeline's number.

In this case, the number wasn't promoted anywhere in relation to the election, and desperate callers -- with pre-existing anxieties that were triggered by this national event, he emphasized -- sought out the lifeline. That's what made the spike in calls so unexpected, though the eventual content was less of a surprise.

"They call and say it's the election," Draper said. "But by the end of the call, it's about their lives, and that's when we can help them."

Calls to the National Suicide Prevention Lifeline, which includes a network of more than 160 crisis centers, have since leveled off. But that's not the case for other services.

Like the national lifeline, the Crisis Text Line -- which connects texters with crisis counselors -- saw swelling numbers as the election results unfolded. Between midnight and 1 a.m. Wednesday, it saw eight times the normal volume of texts, spokeswoman Liz Eddy said.

The Crisis Text Line also saw a surge after Williams committed suicide. Its numbers also climbed after the 2015 Paris and San Bernardino terrorist attacks, when texters who identified as Muslim shared fears about how they'd be treated, Eddy said. But the US election is the first time this new service, founded in 2013, has seen reactions bubble up in response to politics.

In a release Eddy sent out, she said that "election" and "scared" were the top two words mentioned by texters in the 24 hours after the election. And the phrase most commonly associated with "scared" was "LGBTQ."

The Trevor Project is the national leader in providing crisis and suicide prevention support to lesbian, gay, bisexual, transgender and questioning youth. Last year, the organization fielded 54,000 contacts -- made by phone, online chat or text -- according to Steve Mendelsohn, its deputy executive director.

The normal call volume, Mendelsohn said, doubled as a result of the election and has stayed constant. He said more than 95% of those reaching out have talked about the election.

"It's been ongoing since Tuesday night," he explained. "Young people are calling us who've never called us before. They're scared, and they don't know who to turn to. ... Given all the rhetoric that they've heard leading up to the election, it makes sense that they're frightened."

Mendelsohn wasn't able to share exact numbers, saying the organization is more concerned with fielding calls than with running statistical analysis. But he was able to provide some context.

The last time the Trevor Project saw such an extreme uptick in traffic came in 2012, when an episode of the TV show "Glee" included an attempted suicide and featured a Trevor Project PSA. Like the media's influence on calls to the National Suicide Prevention Lifeline after Williams' death, this barrage of contacts was expected.

More recently, Mendelsohn said, there was a spike in unanticipated calls in June, after the Pulse nightclub shooting in Orlando, Florida. The post-election volume, he said, is 70% higher than it was then.

Where it's 'basically apocalyptic'

Lesbian, gay and bisexual youth are four times more likely to attempt suicide than their straight peers. Among young transgender people, nearly half admit to having seriously considered ending their lives, and one-quarter report having attempted suicide. This is according to statistics outlined on the Trevor Project website.

When you factor in transgender people of all ages, the attempted suicide rates are grimmer.

Forty-six percent of trans men (female-to-male) and 42% of trans women (male-to-female) have attempted suicide, according to a 2014 survey (PDF) conducted by the American Foundation for Suicide Prevention and the Williams Institute at UCLA School of Law.

The election results and what they may portend have crushed the transgender community, said Greta Martel, co-founder and executive director of the 2-year-old Trans Lifeline. This crisis hotline has been flooded with more calls than it can take.

On a normal day, the Trans Lifeline fields 50 to 60 calls, Martel said. When North Carolina's House Bill 2, commonly referred to as the "bathroom bill," was at its height in the news, the lifeline got as many as 250 calls a day. But since the election, and with no sign of abating, the service is getting more than 500 calls a day. Given its scrappy, startup size, she says, its workers are lucky if they can answer 200 a day.

Callers are panicked about what lies ahead for them, she said. A repeal of the Affordable Care Act could result in a loss of insurance and the trans-affirming health care they'd finally secured, she said. What will that mean for the hormones they rely on and the surgeries they've planned?

"It's just overwhelming," Martel said. "It's basically apocalyptic right now. I don't know what's going to fix this for us."

She said the staff at Trans Lifeline is doing all it can to support the community, but given what they're seeing right now, they need help to train more volunteers and beef up their efforts.

How to help a person in crisis

If you or someone you know is having a mental health crisis or suicidal thoughts, no matter what the trigger, these national services exist to provide people with support and the reminder that they are not alone.

Beyond what a counselor can say directly, here are some ideas to help lift people up.

Be there for each other. Get back to a routine. Limit exposure to conversations or media -- social or otherwise -- that aggravates feelings of hopelessness. These are just some of the ways in which people can help themselves right now, said Draper, of the National Suicide Prevention Lifeline.

This election ignited for some pre-existing worries and feelings of loss, he said, and once people begin controlling what they can control, the darkness should lift.

One of the best ways to help yourself, he suggested, is to help others through acts of kindness and compassion. Volunteer at a place that matters to you. Get involved with a cause that speaks to your core.