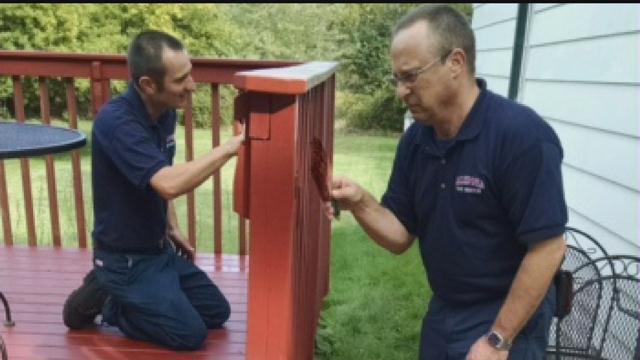 This week a group of firefighters in Caledonia went above the line of duty - trading their firehoses for paintbrushes.

On Wednesday an 84-year-old man injured himself while re-finishing his deck. Now thankful family members are telling CBS 58's Jacob Kittilstad that those firefighters helped finish the chore.

"He mentioned he was over by the step here where the lower deck goes down," Mary Nelsen-Freund said while pointing on a spot on the deck.

She grew up in this house which belongs to her parents. Her dad is the patient in this story. His name's Harold but people around her know him as "the hog".

Maybe because he's tenacious - pulling himself across the deck while injured when no one was around.

Or maybe it's because he's kind of funny - cracking jokes with the neighbor who found him.

"She called 911. And then fire and rescue came from Caledonia. And he jokingly told them 'I gotta finish the deck'," Nelsen-Freund said.

"And they're like 'Oh, we'll take care of it. Don't worry about it'," Nelsen Freund said.

That's the moment firefighters picked up the paint buckets and brushes laid out across the ground.

Jeff Henningfeld was the battalion chief on duty.

"We called an additional crew out to assist. And many hands make light work. And in a couple hours the whole project was completed," Henningfeld said

He says the decision was easy. Had an emergency call came in they would have had to abandon the project. But as luck would have it, it was a slow afternoon.

"The crews didn't want to take any credit for it because this is something that firefighters do everyday. Day in and day out all across the country," Henningfeld said.

"Sometimes it's very hard to do. It's comforting someone after they've lost a loved one or lost their possessions in a fire. Sometimes it's something easy like painting a deck," Henningfeld said.

"He just had the biggest smile on his face," Nelsen-Freund said of her father in the hospital.

"That guy walked in an he couldn't believe that he walked in to see how he was doing first of all. And then telling him that they finished the deck. It was kind of incredulous at the moment," Nelsen-Freund said.

"And they did a spectacular job. It looks awesome," Nelsen-Freund said.

Harold Nelson got out of surgery on Thursday. His family says he's having a rod put in. After that it's at least a month of recovery time.