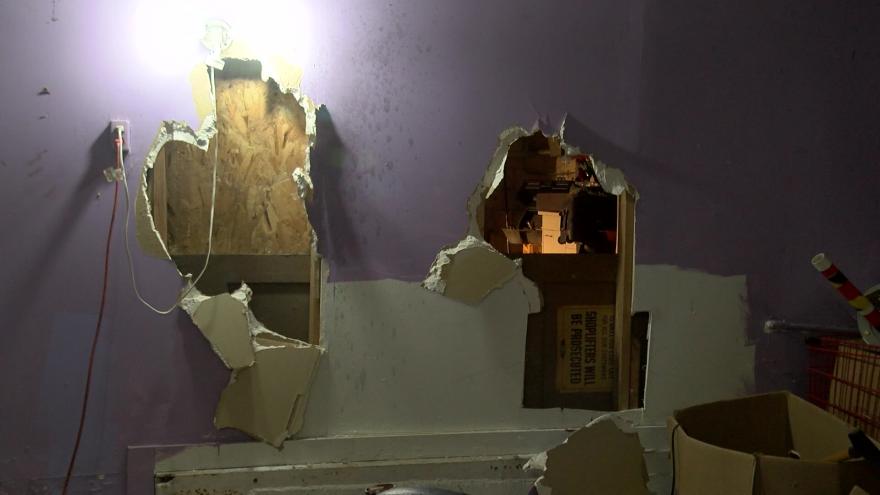 MILWAUKEE (CBS 58) – Business owners on Milwaukee’s south side are demanding action after a suspect arrested following a series of burglaries hasn’t been charged.

The thieves in at least four of five confirmed break-ins, since late December, smashed a hole through a wall before tunneling their way into the businesses to rob them.

Surveillance footage shows a suspect inside a jewelry store and travel agency getting away with more than $2,500 worth of perfume on January 16.

“They’re the expensive ones, but he went in to just get the ones he wanted,” said Zenaida Valdivia of Oro Imports/Travel Agency.

The thief broke in through the back of the store leaving a trail of broken walls as he went from room to room. As if that weren’t enough, the business was targeted again just 48 hours later, at about 1:40 a.m. on January 18, in the same way.

The suspect in that incident wasn’t so lucky. Business owners next door noticed something was off and called the police, who confirm they arrested a 41-year-old man inside the business.

Business owners, think the suspect arrested on January 18 is connected to the previous incidents.

“Same MO, same guy, even with the same jacket I think because we can put all the videos that we have and it’s the same guy,” Lopez said.

More surveillance footage from a January 13th break-in at another store shows a suspect sliding his way in through an opening made on top of the doorway. His face is covered but the business owner says his jacket is similar to the other suspect seen in the footage from the jewelry store. They say they’re afraid for their children who regularly come to the business.

“My kid is really worried for this situation. They don’t want to go to the business,” said Joga Bonito store owner Pablo Razo.

The District Attorney’s Office says the suspect from last week’s arrest hasn’t been formally charged because there wasn’t enough evidence to prosecute him during that incident. However, they do believe the incidents could be connected and are working with police to determine that.

"Our Southside Community Prosecutor is actively working with the Milwaukee Police Department to identify and prosecute the person or persons responsible for these offenses. One matter presented to our office last week did not contain enough evidence to prosecute the appropriate person at that time. However, that matter remains under review as we investigate that incident along with other similar incidents occurring in the neighborhood. We believe the incidents could be connected and are now working with police to determine if that is in fact the case."

The business owners are planning a meeting next Wednesday with their business improvement district, number 38.