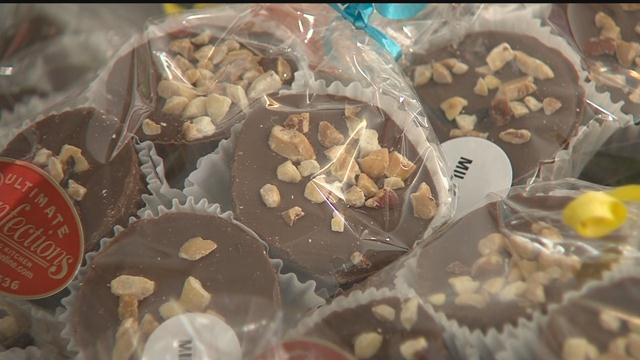 Celebrating 30 years in Burlington, the annual Chocolatefest is underway. There's something new for chocolate lovers to try every year.

More than thirty thousand people are expected to attend the event this year and its all about chocolate; from the treats you see around us even to the ground beneath us.

"Burlington Wisconsin is Chocolate City USA," is the line you hear being sung.

A tag line for the fest that almost wasn't after Hershey, Pennsylvania sued the city of Burlington just a few years after its start. They sued over that very phrase claiming copyright infringement.

"We're the home of Nestle chocolate and we won't give up our name," the song continues, written for the "Chocolate-War."

Turns out they didn't have to; they won. And since its start in 1987 the festival has grown exponentially.

"We have music going on we have a terrific carnival," said Linda Fellenz, from the festival.

Oh and chocolate; tons of it.

You want chocolate? They'll dip anything in it. Bacon. Fortune cookies. The world's hottest pepper.

Even the governor gets into it;  participating in a chocolate eating contest.

Pat Murphy has been driving down from Wauwatosa to sell his chocolates here for more than two decades.

"I've had some memorable customers. Those are stories I'll just keep to myself," said Murphy.

He says the festival changes and the chocolates get more spectacular every year and its what keeps the vendors and those who attend coming back.

"Year after year after year you just see the same customers, and they love it and I think its just the kick off for the  summer for everyone," said Murphy.

The event is completely run by volunteer groups and the money raised, about 150 thousand dollars a year, goes back to local charities.