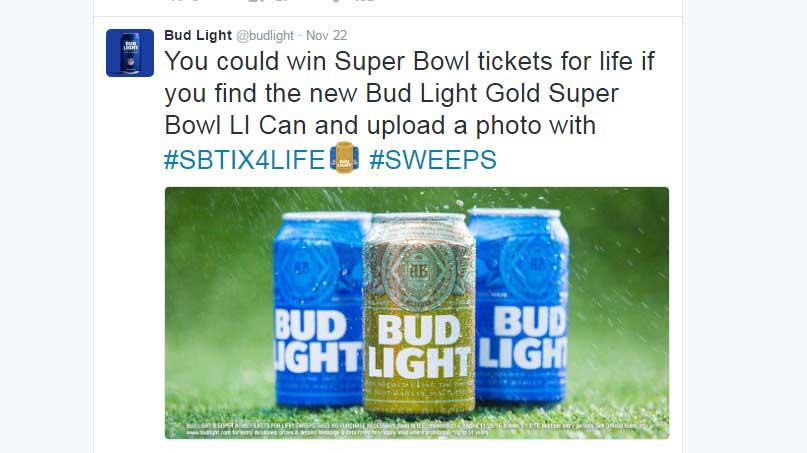 (CNN MONEY) Bud Light is getting its Willy Wonka on.

The company is offering one lucky fan the chance to find a golden beer can and win "Super Bowl tickets for life" -- up to 51 years.

The promotion starts Monday and runs until January 13. Super Bowl 51 is slated for February 5.

Anheuser-Busch InBev (BUD), which makes Bud, will distribute 37,000 golden Super Bowl 51 cans to stores across the U.S. -- except in California.

To enter, fans have to first find a gold can or print a gold label from BudLight.com. Next, they have to take a photo with the can and post it on Facebook, Instagram, Twitter or on the Bud Light website with the hashtag #SBTix4Life and #Sweeps.

Six lucky winners will be chosen per week to get a pair of season tickets to their favorite team, leading up to the final drawing for the grand prize. The big winner will be selected during the week of Jan. 16, 2017.

Bud Light is the official beer sponsor of the NFL.

"As the playoffs approach, we want to see fandom turned up another notch," said Anna Rogers, director of NFL partnerships and strategy, Anheuser-Busch. "Most NFL fans likely won't see one Super Bowl in their lifetime, so we figured what better way to reward one of the NFL's biggest fans than by giving him or her tickets to the big game for the rest of their life?"