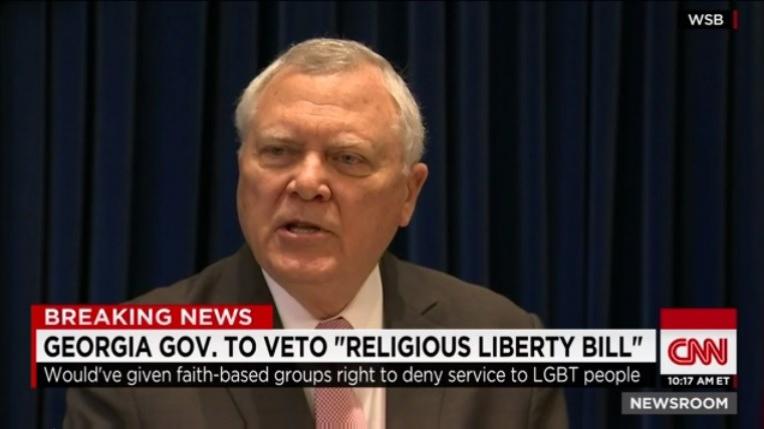 (CNN) Under increasing pressure from major corporations that do business in Georgia, Gov. Nathan Deal announced Monday he will veto a bill that critics say would have curtailed the rights of Georgia's LGBT community.

House Bill 757 would have given faith-based organizations in Georgia the option to deny services and jobs to gay, lesbian, bisexual and transgender people. Supporters said the measure was meant to protect religious freedom, while opponents have described it as "anti-LGBT" and "appalling."

In a news conference Monday morning, Deal said he didn't think the bill was necessary.

"I do not think we have to discriminate against anyone to protect the faith-based community in Georgia, of which I and my family have been a part of for all of our lives," he said.

He said he was not reacting to pressure from the faith-based community or responding to the business community, which warned Georgia could lose jobs if he signed the bill.

'Georgia is a welcoming state'

Deal said he found it ironic that some people acknowledge that God grants the freedoms enumerated in the First Amendment but want the government to enact laws to secure those rights.

"Perhaps we should heed the hands-off admonition of the First Amendment," he said.

After passing in both chambers of the Georgia Legislature, the measure drew outcries from major players in the business, tech and entertainment industries.

Salesforce CEO Marc Benioff said the company "can't have a program in Georgia" if the bill were to become law. Disney said it would stop filming in the state, and Unilever said it would "reconsider investment" if the legislation were signed.

The NFL said the bill could cost Atlanta the opportunity to host the Super Bowl.

More than a dozen states have approved similar laws in the past year.

"HB 757, like so many similar bills, gambled Georgia's economy, reputation and the livelihood of so many of its residents -- all for the sake of advancing discrimination," said Matt McTighe, executive director for Freedom for All Americans. "We thank Gov. Deal for doing the right thing. The governor understands that while our freedom of religion is of critical importance, it doesn't mean there's a need for harmful exemptions that can lead to discrimination."

Also on Monday, a federal lawsuit was filed against the North Carolina governor and other state officials over a new law there that blocks transgender individuals from using public bathrooms that match their gender identity and stops cities from passing anti-discrimination ordinances to protect gay and transgender people.

The suit was filed Monday in U.S. District Court for the Middle District of North Carolina. The defendants are Gov. Pat McCrory, state Attorney General Roy Cooper III, the Board of Governors of the University of North Carolina and board Chairman W. Louis Bissette Jr. Two of the plaintiffs are university system employees, and one is a university student.