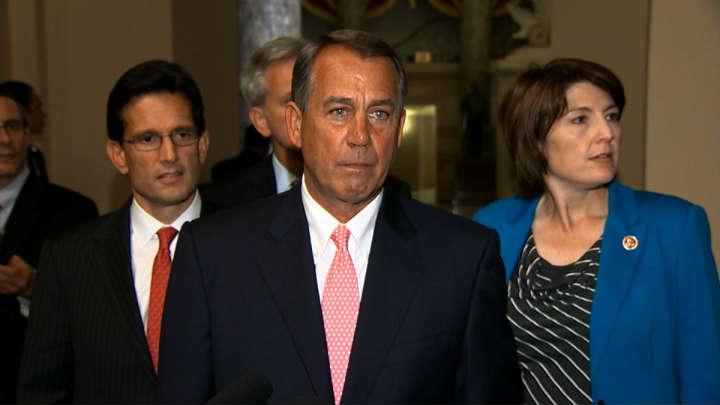 \"We are finalizing a plan to authorize litigation on this issue -- one we believe gives us the best chance of success,\" Boehner said, according to a source in the room.

This means the House would have to take up a resolution to authorize a lawsuit -- as it did on Obamacare last year.

\"Republicans' radical anti-immigrant legislation is dead on arrival. Once again, House Republicans are crawling to the courts to relieve them of their responsibility to govern,\" Drew Hammill said in a written statement.

The move comes as House Republican leaders are struggling to round up support for a border security bill they had planned to vote on this week. The blizzard affecting the East coast postponed the vote, but some conservatives who opposed the bill said it didn't have the support needed to pass. Democrats are virtually united against the measure, so GOP leaders needed to lock in enough votes from their own members, and for now have put off any vote on that proposal.

Some House GOP members determined to block funding for the president's executive action view the border measure as an effort by leaders to placate conservatives who want to push for a full fight to deny money to the Administration.

\"We're tired of trying to be too cute by a half. You know, playing these bait and switch moves and sending something over there [to the Senate] and then conveniently trading it for allowing the president's order to go through,\" Arizona Republican Rep Matt Salmon told reporters.

Senate Majority Leader Mitch McConnell announced the Senate will take up the House-passed bill that strips funding for the president's executive order. But multiple GOP aides acknowledge it's not likely to get the 60 votes needed to overcome a Democratic filibuster. House and Senate Republican leaders insist they don't want any sort of partial shutdown of the Department of Homeland Security due to the immigration battle.

Boehner, pressed for the next step on what he'll do if the Senate rejects the House bill, said, \"there's no reason for me to speculate on what we will or won't do.\"

During Tuesday morning's meeting closed door meeting the Speaker announced the initial steps on challenging the president in court. According to a House GOP leadership aide he told members he is drafting \"a resolution authorizing the House to take a variety of legal actions\" This could mean joining the states' lawsuit on the President's executive action or filing a separate lawsuit.

No decisions have been made on the specific legal action or argument the House GOP will use.