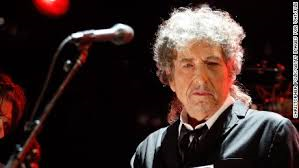 (CNN)The 2016 Nobel Prize in Literature has been awarded to American singer-songwriter Bob Dylan, for "having created new poetic expressions within the great American song tradition."

The Swedish Academy's permanent secretary, Sara Danius, said Dylan, 75, "is a great poet in the English-speaking tradition." She drew parallels between his work and that of ancient Greek poets Homer and Sappho."If you look back, far back, 2,500 years or so, you discover Homer and Sappho and they wrote poetic texts that were meant to be listened to, that were meant to be performed, often with instruments -- and it's the same way with Bob Dylan," she said.

Although Dylan is not in the established canon of literary writers, Danius praised his creative output over five decades, including his constant reinvention of himself.

Asked where those unfamiliar with Dylan's work should start, Danius recommended his 1966 album Blonde on Blonde, saying it contained "many examples of his brilliant way of rhyming."

The award will certainly be a surprise for some. An article published in the New Republic on October 6 was headlined: "Who Will Win the 2016 Nobel Prize in Literature? Not Bob Dylan, that's for sure."

At that point, Dylan was given odds of 50/1 by bookmaker Ladbrokes to win the prize.

His award will be welcomed by legions of fans around the world.One Robyn Hitchcock, tweeted: "He launched me and many others on oceans of which we'd never dreamed..."

Since then, he's collected 10 Grammy Awards, including Album of the Year, one Golden Globe and one Academy Award.

In 2008, he won a Pulitzer Prize special citation for "his profound impact on popular music and American culture, marked by lyrical compositions of extraordinary poetic power."

He becomes the 108th winner of the most prestigious literature award in the world.