Bo Derek: Aging is not for sissies 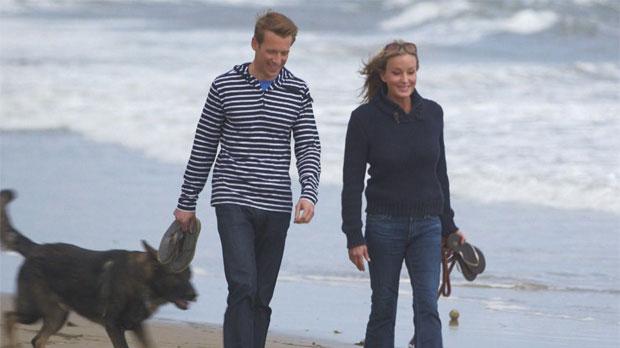 Bo Derek is an actress who made quite an impression with a run on the beach a few decades ago. She talks about that -- and much more -- with our Ben Tracy for this Sunday Profile:

More than 35 years later, Derek is still at home at the beach, and this summer she returns to her other love: movies. She's literally jumping the shark into a pop culture phenomenon.

So, what was it like jumping back into acting?

\"It wasn't really acting,\" she laughed.

\"This was not Shakespeare in the Park?\" asked Tracy.

\"No, this was 'Okay, look over your left shoulder. There's a shark coming!'\" Derek said. \"You know, there are a lot of these! But being on a set, I love the business, I love the film business. And it's always been good to me.\"

When Derek was a teenager, her mom did makeup and hair for actress Ann-Margret. And it was backstage, at one of Margret's Las Vegas shows, where Derek was discovered. Of course that was before she had her made-for-the-movies moniker.

So how did Mary Cathleen Collins end up with the name Bo? \"I made it up!\" she replied. \"I was surrounded by a lot of artists, and I didn't like the name of Cathy Collins.\"

Born in 1956, she grew up in Long Beach, the picture of a California girl. She was just 17 when she met photographer and director John Derek. He was 30 years older, and married to actress Linda Evans. That did not stop Bo and John from running away together.

Tracy asked, \"Were you aware at the time that a lot of people viewed it as very inappropriate?\"

\"Yeah,\" she laughed. \"My mom went ballistic, she went crazy. But you know, when you are 17, you think you know everything. You think you have it together.\"

\"Why do you think that marriage worked?\"

\"Why does any marriage work?\" Derek said. \"First, I think, for me our marriage worked because I loved him, he loved me. Although he was 46, he was still growing, too. I think we took it day-to-day. I don't think we expected it to last, either.

It lasted for 22 years, until John Derek died from a heart attack in 1998. The two never had children, but he was her partner in life, and business.

After her breakout role in \"10,\" Derek decided to produce and act in films that she made with her husband, even if that meant never having the starring role in a blockbuster movie.

Tracy asked, \"Do you think you made the right choices?\"

\"I do,\" Bo replied. \"Not in terms of being a star, not in terms of winning an award. But I had a blast. And anything I wanted to do, someone would finance.\"

Their movies (such as \"Tarzan, the Ape Man\" and \"Bolero\") were often less about dialogue and more about how little Bo Derek was wearing.

How did she objectify herself? \"I created my own posters, I made my own movies. I produced them. Maybe I could've gone out to prove, 'Oh, I'm a real actress, I'm not a physical being.' But I pretty much exploited myself, too, at the same time.\"

Tracy asked, \"Was your beauty a commodity to you? Or was it really your identity?\"