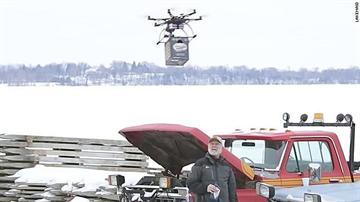 Local brewery Lakemaid was testing a new drone delivery system to airlift frosty cases of beer to fishermen holed up in ice shacks on Mille Lacs Lake. After spotting a Lakemaid YouTube video that went up last week of one of the unmanned aerial vehicles (UAVs) on a test run, the Federal Aviation Administration contacted Lakemaid and told the company to stop.

Unfortunately for Lakemaid fans and anyone else dreading a walk to the corner store, it's currently against the law to fly drones for commercial purposes or above 400 feet in the United States. The FAA is working on a comprehensive set of rules and regulations that will pave the way for commercial drone flight, but the legislation won't be ready until at least 2015 and drones might not be in the skies until 2017.

Until then, thirsty fishermen must obtain their beverages through old-fashioned terrestrial delivery methods.

The great beer grounding of 2014 might just be the issue that will turn Americans into pro-drone advocates. A WhiteHouse.gov petition has already gone up, asking the Obama administration to issue Lakemaid an airworthiness certificate. So far, 183 thirsty UAV advocates have signed the petition (only 99,817 signatures to go!).

Kentucky Sen. Rand Paul has previously expressed his support of aerial beer delivery on Twitter. In August he said \"Perhaps I am not against ALL drones!\" and linked to a news story about a drone delivering beers during a music festival in South Africa.

Only amateurs are allowed to fly drones at this time, and they're limited to small vehicles under 55 pounds. They can only operate the aircraft for fun, not for profit, and they must adhere to local and federal laws. For example, drones are not allowed to cruise over populated areas.

Some groups have received exceptions to test drones for research purposes.

\"While we are evaluating many potential uses of [UAVs] as we move toward their safe integration into the nation's airspace, commercial operation of such aircraft is not yet allowed,\" said FAA spokesperson Elizabeth Cory in an e-mail.

Announcing plans to deliver goods by drone has been a popular publicity stunt for U.S. companies over the past year. On a recent \"60 Minutes\" segment, Amazon demonstrated a drone delivery system it's working on for packages. The company conducted the tests outside the country to avoid breaking U.S. law. In June, the Domino's pizza chain said it was developing a drone capable of delivering up to two pizzas.

The FAA has asked other companies and institutions to ground their drones in the past year. The agency has contacted a company in Wisconsin that used drones to capture aerial footage for real estate. And the Drone Journalism Lab at the University of Nebraska received a cease-and-desist letter for its attempts to use drones for reporting purposes.

Even once FAA regulations are in place, we likely won't see the skies filling up with beer deliveries. Interested companies will have to get proper training and licenses.

\"We are concerned about possible careless and reckless operation, especially if someone on the ground is hurt by an object or objects falling from the [UAVs],\" said Cory, citing the FAA regulation that prohibits careless flying.

Delivery of goods is expected to be a small segment of future drone market. The bigger commercial uses will focus on agriculture, law enforcement and aerial photography.

Delicious test cases like beer and fast-food delivery might be gimmicky, but they can help ease the public's concerns about drones in the sky. The technology is mostly known for its military applications, and civil liberties groups are concerned about drones being used for surveillance by law enforcement. Local residents in Deer Trail, Colorado, have even attempted to pass a law that makes it legal to shoot down drones with the proper drone hunting license.

But the next generation of friendly drones aren't all packing weapons or collecting data for the NSA. Some just want to bring you a nice cold one and maybe a slice without getting stuck in traffic.