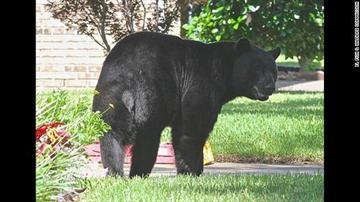 (CNN) -- A Florida woman is recovering after being attacked by bears who had ambled into her open garage and were sifting through her garbage cans in search of food, sheriff's deputies said Sunday.

The woman said as many as five bears \"of various sizes\" were rooting through her trash when she walked into the garage, Seminole County Sheriff's Lt. Pete Brenenstuhl said. The bears \"dragged her from inside the garage out into her driveway,\" leaving her with scrapes and cuts to her face and legs, Brenenstuhl said.

The woman escaped and ran back into her home, where her husband called 911, he said. She was taken to a nearby hospital for treatment.

Florida Fish and Wildlife Commission Lt. Jeff Hudson said the woman had an \"encounter with a black bear,\" but could not confirm the reports of multiple bears being involved in the incident.

The Saturday night encounter came the same day Florida wildlife officials warned that black bears and their cubs have started moving around in search of food after winter. The agency urges residents to use bear-resistant trash cans to prevent incidents like Saturday night's.

\"Now is the time to expect bears to show up looking for food,\" Dave Telesco, the head of the wildlife commission's bear management program, said in Saturday's advisory. \"If they can't find food in your neighborhood, they'll move on.\"