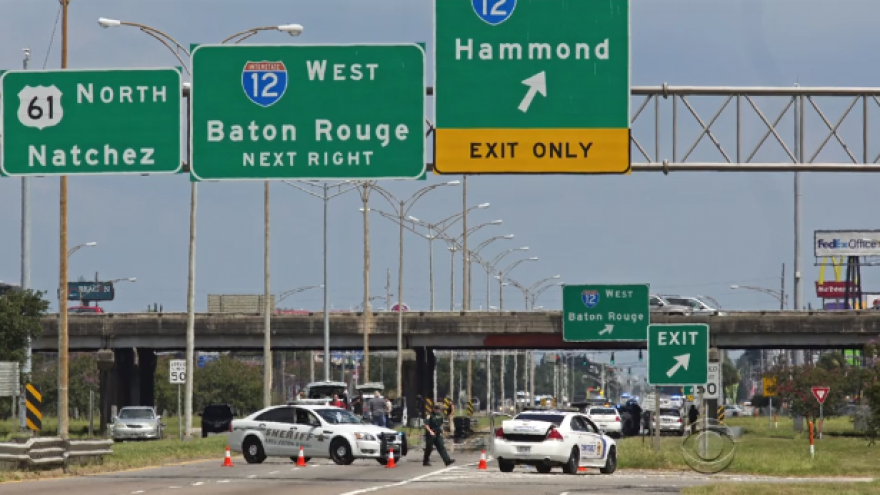 DeRay Mckesson and four other Black Lives Matter leaders are named as defendants in the suit filed Friday on behalf of one of the officers wounded in the July 17, 2016, attack by a black military veteran, Gavin Eugene Long, who killed three other officers before he was shot dead.

The attorneys representing Tullier previously sued Black Lives Matter and Mckesson on behalf of a Baton Rouge police officer who was injured at a protest over a deadly police shooting last July.

"This is quite a world," Mckesson said Friday when a reporter informed him of the latest lawsuit.

Gavin Long, a 29-year-old former Marine from Kansas City, Missouri, was armed with a semi-automatic rifle when he killed three officers and wounded three others outside a convenience store and car wash near Baton Rouge police headquarters.

Long's tours of duty included Japan and Iraq. He rose to the rank of sergeant and received an honorable discharge.

But in 2015, he declared himself a "sovereign citizen," aligning himself with a movement which federal authorities have called a "growing domestic threat," CBS News correspondent Dean Reynolds reported. Sovereign citizens believe government and law enforcement do not hold any authority.

Long described himself as a life coach, nutritionist, and personal trainer. He posted his thoughts in a series of YouTube videos.

"I thought my own thoughts, I made my own decisions, I'm the one who gotta listen to the judgment," Long said in one video.

In a separate video posted 10 days before the shooting, Long said he was "affiliated with the spirit of justice."

"Don't affiliate me with nothing," Long said. "Yeah, I was also a Nation of Islam member, I'm not affiliated with it… They'll try to put you with ISIS or some other terrorist group -- no."

Long also left behind a note saying he believed he had to inflict harm "upon bad cops as well as good cops in hopes that the good cops (which are the majority) will be able to stand together and enact justice and punishment against bad cops."

During the ambush, Long shot Tullier in the head, stomach, and shoulder, leaving him with brain damage. By December, the 42-year-old father of two had emerged from a vegetative state, regained some movement of his body and was able to communicate nonverbally.

The attack came less than two weeks after a white Baton Rouge police officer shot and killed Alton Sterling, a 37-year-old black man. Mckesson was one of nearly 200 people arrested in Louisiana's capital at nightly protests after Sterling's July 5 death.

Friday's lawsuit claims Mckesson was "in charge of" a July 9 protest that "turned into a riot." Mckesson "did nothing to calm the crowd and, instead, he incited the violence" on behalf of Black Lives Matter, the suit alleges.

The suit describes Long as an "activist whose actions followed and mimicked those of" the sniper who killed officers in Dallas days earlier. The suit also claims Black Lives Matter leaders incited others to harm police "in retaliation for the death of black men killed by police" and "all but too late" began to denounce the shootings of police after the Baton Rouge attack.

"Obviously, at this point talk show hosts were holding them responsible, and they were having to defend the blame and responsibility for what they had caused whether in whole or in part," the suit says.

Mckesson said he hadn't spoken to his attorney, Billy Gibbens, about the lawsuit and couldn't immediately comment on its allegations. Gibbens declined to comment.

During a court hearing last month, Gibbens argued Black Lives Matter is a movement, not an organization that can be sued. The federal judge assigned to the first suit against Mckesson hasn't ruled on that yet.