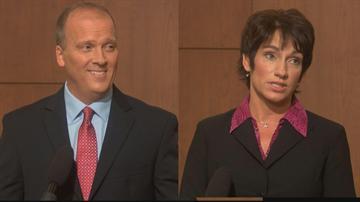 MILWAUKEE- Sunday was the first debate between the two candidates for Attorney General.

The two candidates were pressed on how they would defend state laws.

Schimel explained that he would enforce the laws as they are written and he described doing the opposite as \"being an activist.\"

He said the role of the Attorney General is not to be a super-legislator.

A ban on gay marriage and voter ID were used as examples in this discussion.

Happ said the Attorney General cannot be a robot.

The state's heroin epidemic, internet crimes against children, and criminalizing first offense drunk driving were all touched on.

They both said that until they see proof, the law shouldn't be changed.

The latest Marquette poll shows that the candidates for Attorney General remain unknown to more than 8 in 10 voters.

They both hope this debate and two others later in October will change that.