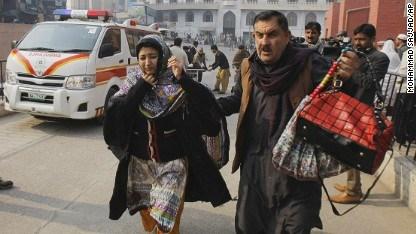 The Taliban stormed a military-run school in northwest Pakistan on Tuesday, gunning down at least 126 people -- most of them children -- in one of the volatile Asian nation's deadliest attacks.

Hours after the attack, Pakistani troops were still exchanging gunfire with the militants inside the Army Public School and Degree College in the violence-plagued city of Peshawar, about 120 kilometers (75 miles) from the country's capital, Islamabad.

By around 4 p.m. (6 a.m. ET), the Pakistani military had pushed the attackers back to four blocks of the school, military spokesman Gen. Asim BajwaI tweeted. BajwaI added a short time later that five assailants had been killed.

It was unclear, by then, how many of the military school's hundreds of students were still inside -- and how many were dead and alive.

Reports on the scale of the bloodshed spiked dramatically, from a handful to upwards of 100, in a few short hours earlier Thursday. Where the death toll would end up is still uncertain, though it's sure to be horrific.

Most of those killed were between the ages of 12 and 16, according to Pervez Khattak, chief minister of Khyber Pakhtunkhwa province, where Peshawar is located.

In a telephone call to CNN, the Pakistan Taliban -- Tehreek e Taliban Pakistan, or TTP -- said six suicide bombers scaled the walls of the school with orders to kill older students about 10 a.m.

The Taliban said \"300 to 400 people are under the custody of the suicide bombers.\"

The military had earlier said most students and teachers had been evacuated.

Pakistan has seen plenty of violence, much of it involving militants based in provinces such as South Waziristan, North Waziristan and the Khyber Agency -- all restive regions in northwest Pakistan, along its border with Afghanistan.

It is the home base the TTP, an organization that has sought to force its conservative version of Islam in Pakistan. They've battled Pakistani troops and, on a number of occasions, attacked civilians as well.

Schoolchildren have been among their targets. The most notable among them was Malala Yousafzai, who was singled out by Taliban militants October 9, 2012, and shot while riding from home. The teenage girl survived and, last week, became the youngest ever recipient of the Nobel Peace Prize for her efforts to promote education and girls rights in Pakistan and beyond.

Still, even by Pakistan and the Taliban's gruesome standards, Tuesday's attack may be the most abominable yet.

This is the deadliest incident inside Pakistan since October 2007, when about 139 Pakistanis died and more than 250 others were wounded in an attack near a procession for exiled former Pakistani Prime Minister Benazir Bhutto, according to the University of Maryland's Global Terrorism Database.

As recently as last spring, The Taliban and the Pakistani government were involved in peace talks. The government released 19 Taliban noncombatants in a goodwill gesture.

But talks broke down under a wave of attacks by the Taliban and mounting political pressure to bring the violence under control.

Taliban: Revenge for killing of tribesmen

In September 2013, choir members and children attending Sunday school were among 81 people killed in a suicide bombing at the Protestant All Saints Church of Pakistan. A splinter group of the Pakistan Taliban claimed responsibility for the church attack, blaming the U.S. program of drone strikes in tribal areas of the country.

And for the past few months, the Pakistani military has been conducting a ground offensive aimed at clearing out militants. The campaign has displaced tens of thousands of people.

The military offensive in the region has spurred deadly retaliations.

Mohammed Khurrassani, the TTP spokesman, told CNN that the latest attack was revenge for the killing of hundreds of innocent tribesmen during repeated army operations in provinces including South Waziristan, North Waziristan and the Khyber Agency.