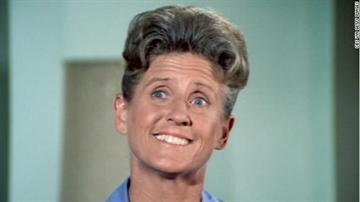 (CNN) -- Ann B. Davis, known for her role as housekeeper Alice Nelson on \"The Brady Bunch,\" died Sunday, close friend Bishop William Frey said. She was 88.

According to Frey, Davis fell and hit her head Saturday morning in her bathroom. She suffered a subdural hematoma and never regained consciousness.

Appearing in her trademark light blue maid's uniform with a white apron, Alice anchored \"The Brady Bunch\" with her cheerful attitude and witty one-liners.

In a 2004 interview with the Archive of American Television, Davis described how she created the character.

\"I made up a background story. I did have a twin sister, so I used that as a basis. ... I cared very much about this family. It was my family. It was close to my family as Alice would ever get. I would have died for any single one of them at any point,\" she said. \"You know, they wrote me such gorgeous things to do, as the intermediary between the kids and the adults, and between the boys and the girls. And they gave me funny things to do.\"

In real life, Davis said she wasn't quite as handy around the house as her beloved character.

\"I basically don't do that well with children, although my sister says I'm a great aunt,\" she told People, adding that she hates to cook.

Davis had planned to study medicine at the University of Michigan but caught the acting bug from her brother, who was a dancer in the national company of \"Oklahoma,\" according to a biography of the actress on IMDb.com.

Her big break in Hollywood came when she won the role of Charmaine \"Schultzy\" Schultz, the secretary on the 1950s sitcom \"The Bob Cummings Show,\" IMDb said.

But to generations of American TV viewers, she was best known as Alice.

Frey, who knew Davis for 38 years, said fans often told her that they felt like they'd been raised by the character of Alice.

\"Look how well you turned out,\" she would reply.

\"What you see on 'The Brady Bunch' was who she was,\" Frey said. \"She was a very faithful Christian person.\"

Davis mostly retired from show business in the late 1970s to settle down in an Episcopal community.

\"I'm convinced we all have a God-shaped space in us, and until we fill that space with God, we'll never know what it is to be whole,\" she told People.

Even as she turned her focus more toward religion, she appeared in commercials and several stage productions.

In the 1995 \"The Brady Bunch\" movie, she played a truck driver, persuading a runaway Jan to return home.

She told the Archive of American Television that she loved working on the small screen.

\"The neatest thing about television is that they write for you. ... They find out what you can do, what you do best, how it works, and how they can use you. And so from there on, it's wonderful. Because it's different. It's not like playing the same play forever and ever and ever,\" she said. \"But the character's still the same. It just gets better and more developed. So that's great fun.\"