An Argument and a Robbery Lead to Shootings Monday Night 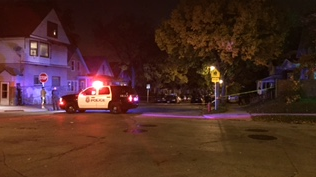 An ongoing dispute between two men  resulted in one being shot Monday night and the other being taken into custody by the Milwaukee Police.  The shooting happened around 11:30 PM near S 25th Street and W Lapham Boulevard.  According to the MPD, the individuals were in an argument when one produced a gun and shot the other.  The victim, a 51-year-old man, received what is believed to be a non-life threatening injury.  He was treated at the scene by the Milwaukee Fire Department and then taken to a local hospital.  The suspect in the shooting remained at the scene and is now in the  custody of the Police.

Earlier Monday evening, around 8:30 PM, a 23-year-old man was the target of an armed robbery near W Burnham Street and Winona Lane.  According to the MPD, during the robbery the victim tried to disarm the attacker and was shot.   The suspect then fled the scene on foot.   The victim was taken to a local hospital for treatment of his injury.  He is expected to survive.  The MPD is continuing to search for a suspect in the shooting.