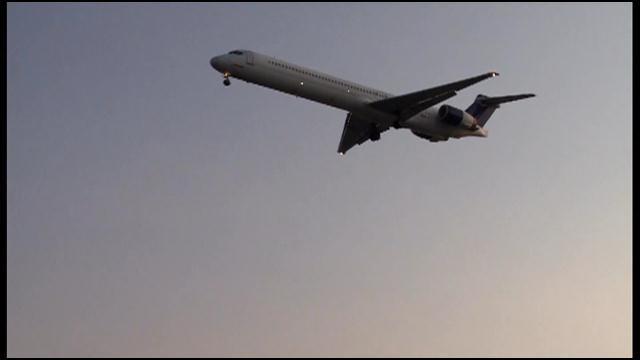 Thousands of airport workers in Chicago, Boston, New York City,Newark, Philadelphia, and Fort Lauderdale are expected to strike on Wednesday night and into Thursday.

The workers, mostly cabin and airport cleaners, are subcontracted by outside companies to work with various airlines, including JetBlue, Delta and United. They will be striking for new contracts, which include medical benefits and higher wages of $15 an hour.

In Fort Lauderdale, cabin and airport cleaners will be joined by baggage handlers, ramp workers, wheelchair attendants, and janitors.

Picket lines will form starting Wednesday outside one of the terminals at each of the airports. The strikes are being organized by the 32BJ SEIU union.

A JetBlue spokesperson said the company "worked with our partners to ensure there are no flight interruptions."

United said its vendors have contingency plans to ensure customer service will not be interrupted.

The head of the New York-New Jersey Port Authority, which runs the New York City airports, demanded last year that airport workers' wages be raised to $10.10 an hour. But workers insist that is insufficient.

Strikers include cabin and airport cleaners at both John F. Kennedy and LaGuardia airports. They are protesting their employers Roma and Ultimate Aircraft, which are subcontracted by JetBlue, and Gate Serve, which is subcontracted by Delta.

One of the cabin cleaners who plans to strike on Wednesday is 41-year-old Jean Timmer.

He began working for Ultimate Aircraft in September and told CNNMoney he makes $10.10 an hour working the overnight shift.

"It's not enough to support our families," he said.

Timmer, who has one daughter, stressed the importance of earning a living wage and securing medical benefits.

"Safety concerns are a really big deal and if we get injured who's going to pay for that -- we are," Timmer said.

He said he chose to work at JFK because there are a lot of opportunities for advancement, but stressed that current working conditions were unbearable.

"We're not getting our fair share," Timmer said. "These companies can't function without workers and yet they don't want to treat us fairly."