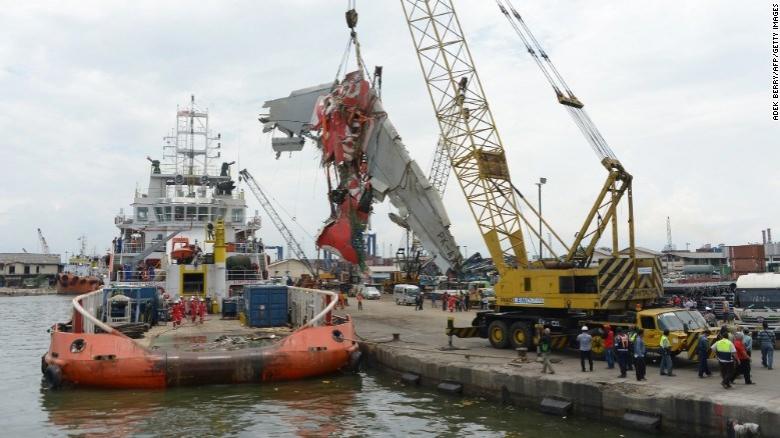 The ill-fated plane was en route to Singapore from the Indonesian city of Surabaya on December 28 last year when it crashed into the Java Sea, killing all 162 people on board.

The plane's flight control computer had a cracked solder joint that kept malfunctioning. Aircraft maintenance records found it had malfunctioned 23 times in the year before the crash, and the interval of those became shorter in the three months prior to the crash.

"Subsequent flight crew action resulted in inability to control the aircraft... causing the aircraft to depart from the normal flight envelope and enter a prolonged stall condition that was beyond the capability of the flight crew to recover," Indonesia's National Transport Safety Committee said in a report.

In other words, "it's a series of technical failures but it's the pilot response that leads to the plane crashing," CNN's aviation correspondent Richard Quest said.The investigation, a joint effort involving Australian, French, Singaporean and Malaysian authorities, point to weaknesses in pilot training in dealing with upsets, or when an aircraft is angled greater than 45 degrees.

"Our recommendation to Air Asia is to train their pilots flying the Airbus plane on how to make an upset recovery," investigator Nurcahyo Utomo said.

The Air Asia pilots had not been trained for that scenario, he added, because the manual provided by the plane's manufacturer said the aircraft, an Airbus 320, was designed to prevent it from becoming upset and therefore upset recovery training was unnecessary.

Air Asia has since required upset recovery training for its pilots, Utomo said.

Utomo also said the cockpit voice recorder showed confusing instructions from the captain to the copilot who was manning the controls at the time.

"A huge amount of training is done on take off and landing and traditionally of course is 70-80% (of when accidents take place), only 10% takes part in the cruise phase of flight. But if something does happen in the cruise phase of flight, it does typically end up fatal."Preliminary findings from the NTSC earlier this year said roughly 35 minutes into the two hour flight, the pilot asked air traffic control for permission to climb to avoid stormy weather.

The plane went from cruising at 32,000 feet, ascending steeply to 37,400 in about 30 seconds -- something commercial planes are not designed to do. It may have been climbing at a rate twice as fast as it could and should, one analyst told CNN.

Although the area was experiencing turbulent weather patterns, seven other planes flying nearby landed safely.

Malaysia-based Air Asia did not have the clearance to fly the route on that particular day.Indonesia's National Transportation Safety Committee issued several recommendations to Air Asia, Airbus as well as Indonesian, US and European aviation regulatory bodies but the statement did not detail what they are.

The crash is one in a string of aviation disasters, including the mysterious disappearance of MH370, to occur in Southeast Asia.