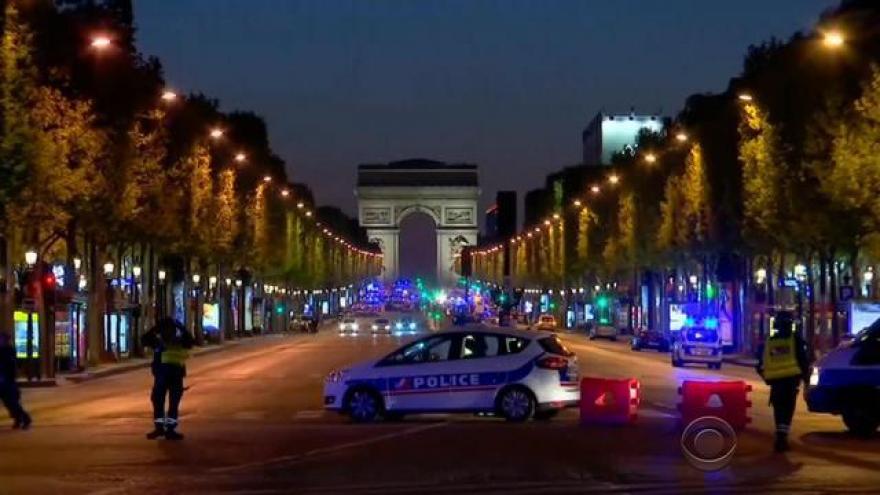 PARIS -- France began picking itself up Friday from another deadly shooting claimed by the Islamic State of Syria and Iraq (ISIS) group, with President Francois Hollande convening the government’s security council and his would-be successors in the presidential election campaign treading carefully before voting this weekend.

Investigators found a pump-action shotgun and knives in the car of the gunman who targeted police on the Champs-Elysees, and were working to determine whether he had accomplices. The prime minister said the government has reviewed its already extensive election security measures and says it is “fully mobilized” for Sunday’s vote.One of the key questions was whether, and how, the attack that killed one police officer and wounded three other people might impact voting intentions. The risk for the main candidates was that misjudging the public mood, making an ill-perceived gesture or comment, could damage their chances. With polling just two days away, and campaigning banned from Friday at midnight, they would have no time to recover before polls open on Sunday. Candidates on Friday canceled or rescheduled final campaign events.

“Nothing must hamper this democratic moment, essential for our country,” Prime Minister Bernard Cazeneuve said, appealing for national unity and for people “not to succumb to fear.”

“The whole of Europe is targeted because it represents the values and ideals of peace,” he said.

Far-right French populist leader Marine Le Pen on Friday called for “a clear head and a firm grip” in the wake of the attack, which put the focus back on one of the main themes of her election campaign for the French presidency: France’s fight against Islamic extremism.

Speaking on RFI radio, Le Pen said: “It is time to stop being naive.”

More than 50,000 police and gendarmes are mobilized to protect Sunday’s first-round vote in the two-stage election, with an additional 7,000 soldiers also on patrol. He added that the intelligence services are working “in the shadows” and elite intervention police forces are also on alert.On the iconic avenue in the heart of Paris, municipal workers in white hygiene suits were out before dawn Friday to wash down the sidewalk where the assault took place - a scene now depressingly familiar after multiple attacks that have killed more than 230 people in France in little over two years. Delivery trucks did their early morning rounds; everything would have seemed normal were it not for the row of TV trucks parked up along the boulevard that is a must-visit for tourists.

The two police officers injured in the attack are out of danger, Interior Ministry spokesman Pierre-Henry Brandet said. National police spokesman Jerome Bonet, also speaking on BFM television, said “there were thousands of people” on the iconic boulevard in Paris when the gunman opened fire and that the rapid response of officers who shot and killed him avoided a possible “carnage.”The attacker emerged from a car and used an automatic weapon to shoot at officers outside a Marks & Spencer’s department store at the center of the Champs-Elysees. Police shot and killed the gunman. One officer was killed and two seriously wounded. A female foreign tourist also was wounded, said Paris prosecutor Francois Molins. ISIS’s claim of responsibility just a few hours after the attack came unusually swiftly for the extremist group, which has been losing territory in Iraq and Syria.

In a statement from its Amaq news agency, the group gave a pseudonym for the shooter, Abu Yusuf al-Beljiki, indicating he was Belgian or had lived in Belgium. Belgian authorities said they had no information about the suspect.

Investigators searched a home early Friday in an eastern suburb of Paris believed linked to the attack. A police document obtained by The Associated Press identifies the address searched in the town of Chelles as the family home of Karim Cheurfi, a 39-year-old with a criminal record.

Police tape surrounded the quiet, middle-class neighborhood and worried neighbors expressed surprise at the searches. Archive reports by French newspaper Le Parisien say that Cheurfi was convicted of attacking a police officer in 2001.Authorities are trying to determine whether “one or more people” might have helped the attacker, Brandet said.

The attacker had been flagged as an extremist, according to two police officials, speaking on condition of anonymity because they weren’t authorized to publicly discuss the investigation.

The attack appeared to fit in a spreading pattern of French extremists targeting security forces and symbols of the state, to discredit, take vengeance and destabilize. It recalled two recent attacks on soldiers providing security at prominent locations around Paris: one at the Louvre museum in February and one at Orly airport last month.

Leading presidential candidates have urged greater counterterrorism measures in a campaign already under a state of emergency.

Centrist candidate Emmanuel Macron appealed to French voters to keep a cool head. Speaking Friday on RTL radio, Macron said: “What our attackers want is death, symbolism, to sow panic (and) to disturb a democratic process, which is the presidential election.”

He vowed that, if elected, he would within weeks of taking power create a task force to coordinate French intelligence efforts against ISIS.

Far-right candidate Marine Le Pen, who campaigns against immigration and Islamic fundamentalism, took to Twitter to offer her sympathy for law enforcement officers “once again targeted.” She canceled a minor campaign stop, but scheduled another.

Conservative contender Francois Fillon, who has campaigned against “Islamic totalitarianism,” said on France 2 television that he was canceling his planned campaign stops Friday.

The two top finishers in Sunday’s election will advance to a runoff on May 7.