The last batch of light snow is moving through the Milwaukee metro. Once this moves through we'll dry out for the rest of the night with some patchy fog. 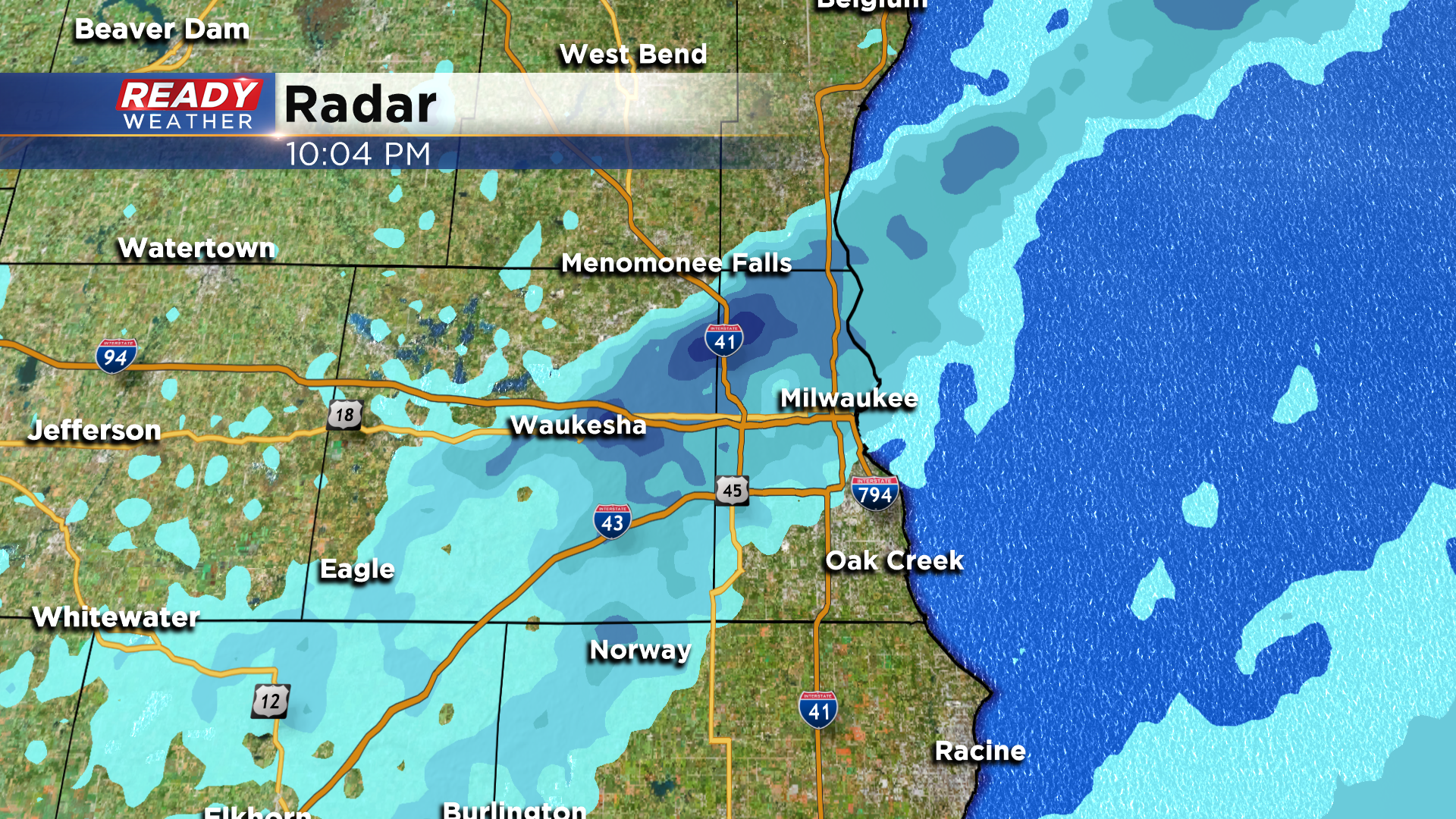 In general, 2-5" of snow fell across southeast Wisconsin with the heaviest totals north and west of Milwaukee in the snow band that parked itself for a few hours. 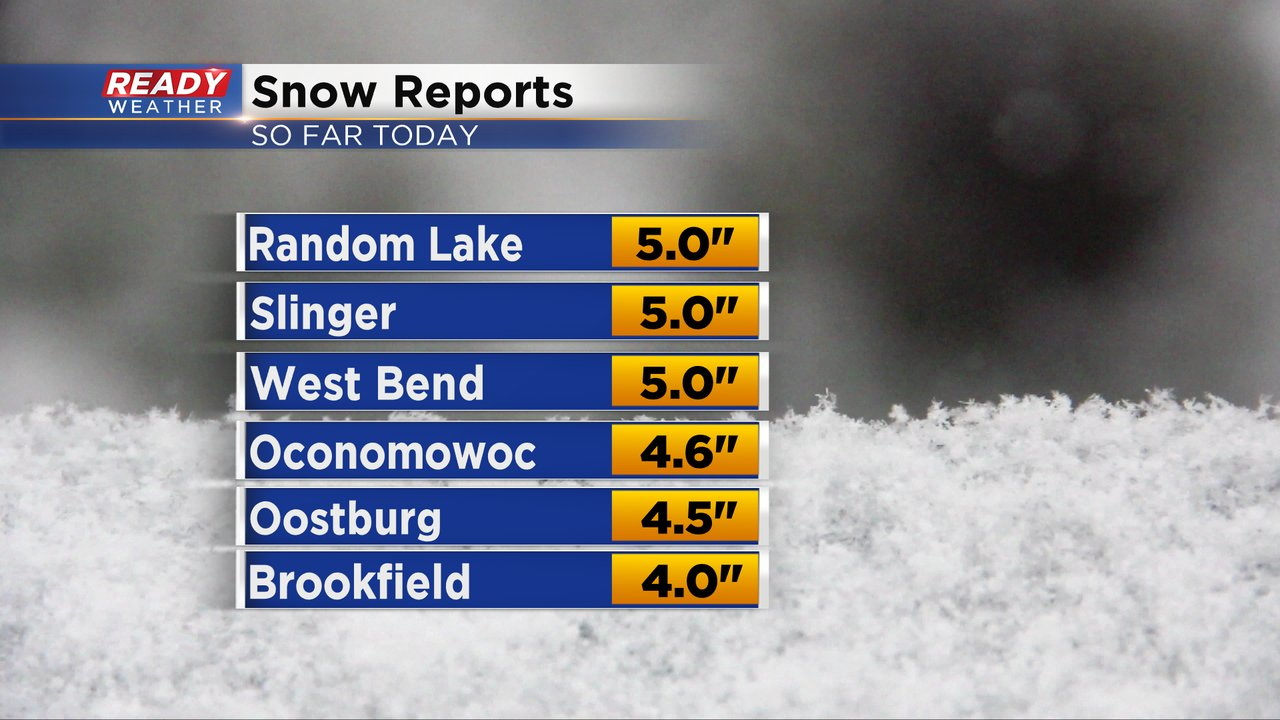 We'll have to wait until midnight for a final snow totals in Milwaukee, but 2.8" was measured downtown. 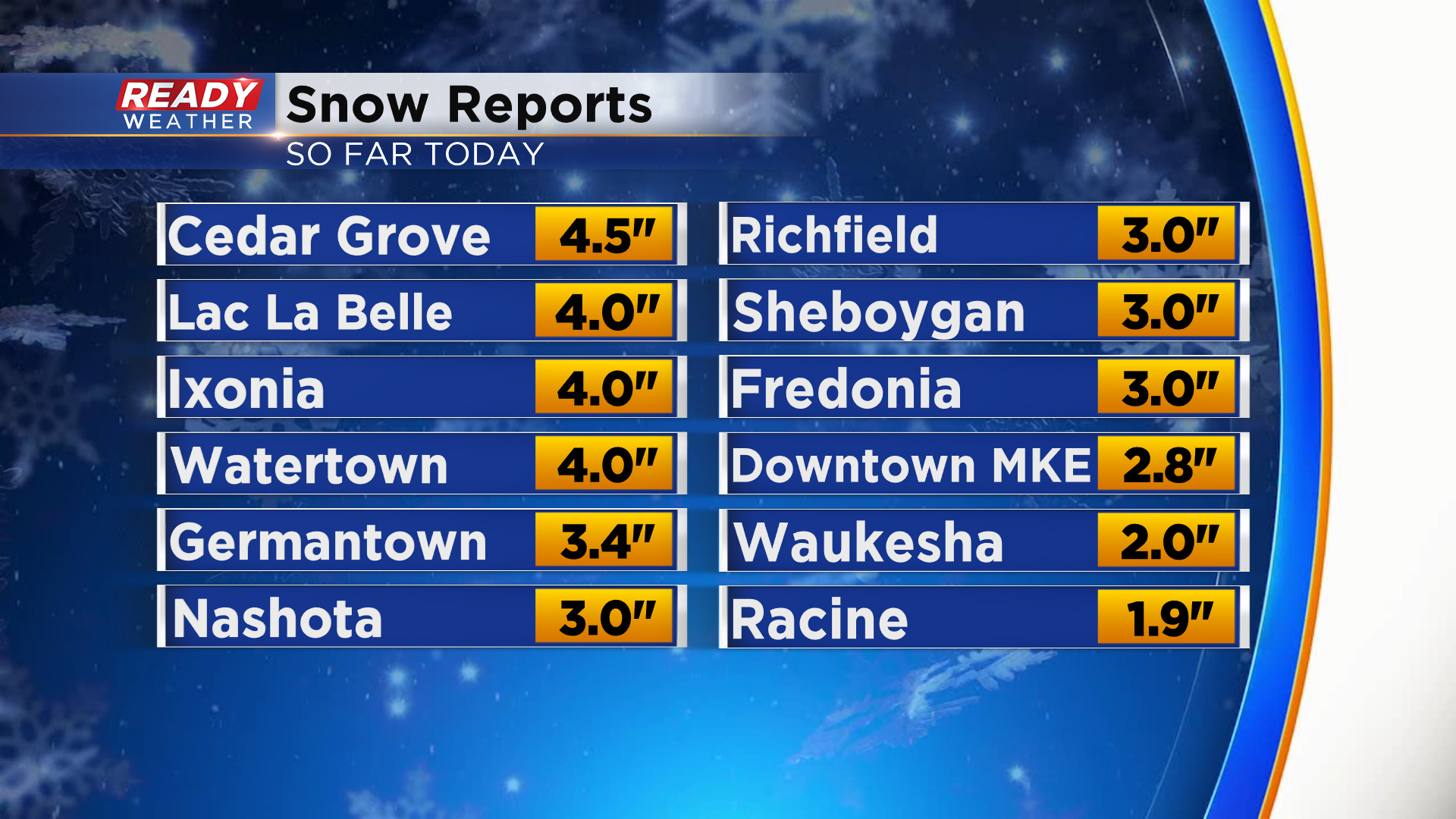 The heavy band of snow that parked just north of Milwaukee over the last couple of hours is slowly starting to shift to the east into the Milwaukee metro. 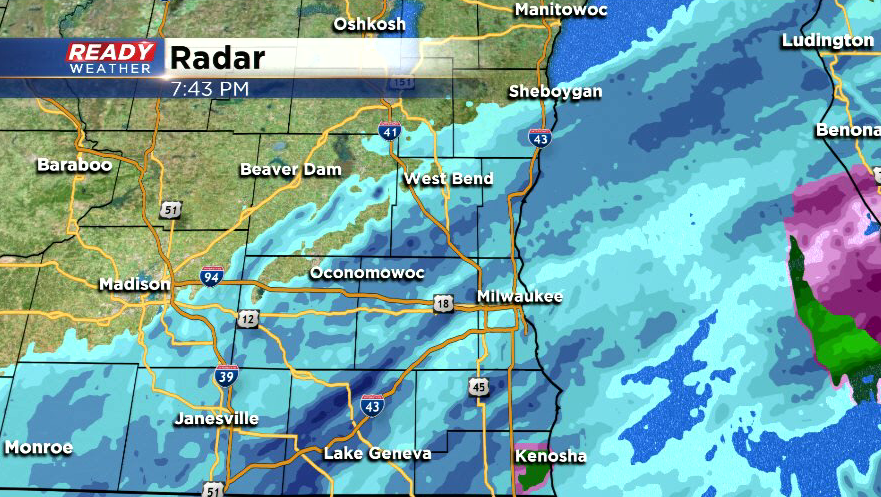 Snow reports between 3-4" have been common under that band with 4.5" falling in Oostburg! Around 1.5"-2.5" has fallen across Milwaukee county so far. 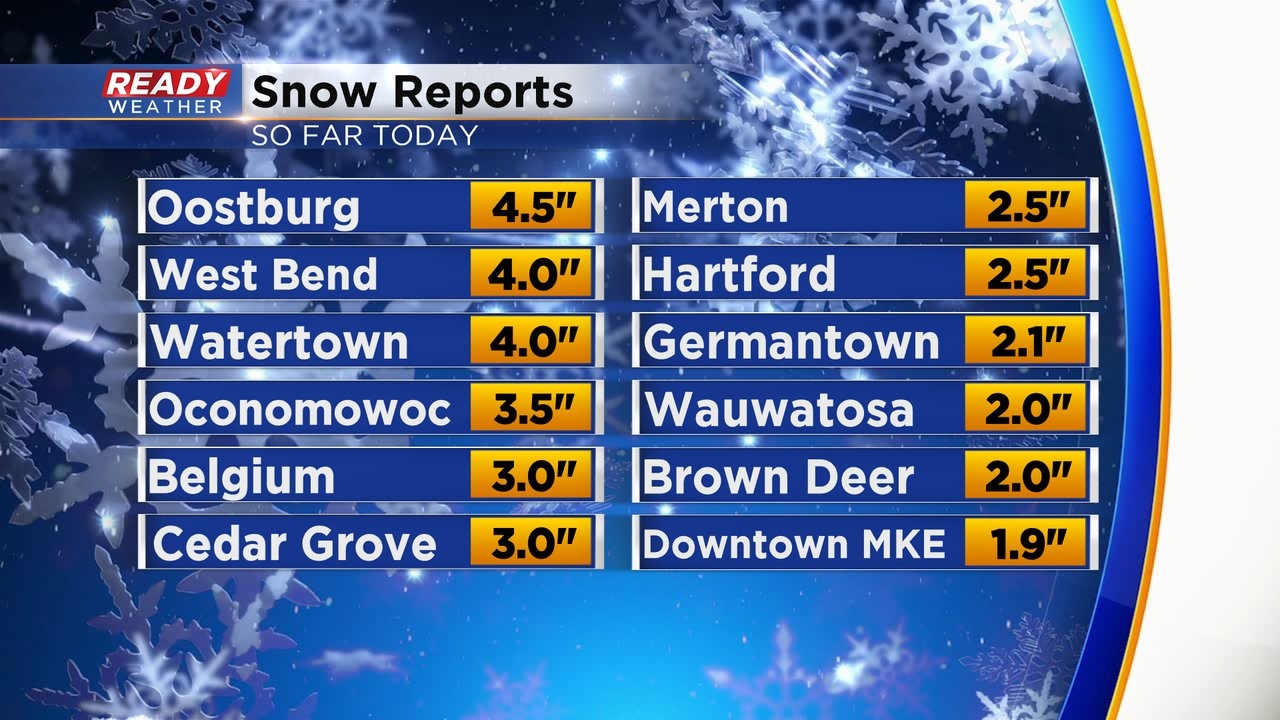 Snow is still on track to exit the area by midnight.

Washington and Ozaukee counites have been added to the Winter Weather Advisory as a heavy band of snow producing 1"/hr snowfall rates has parked across those counties. Another snow band is setting up across Racine and Walworth counties, with rates of 1"/hr possible under this band as well. 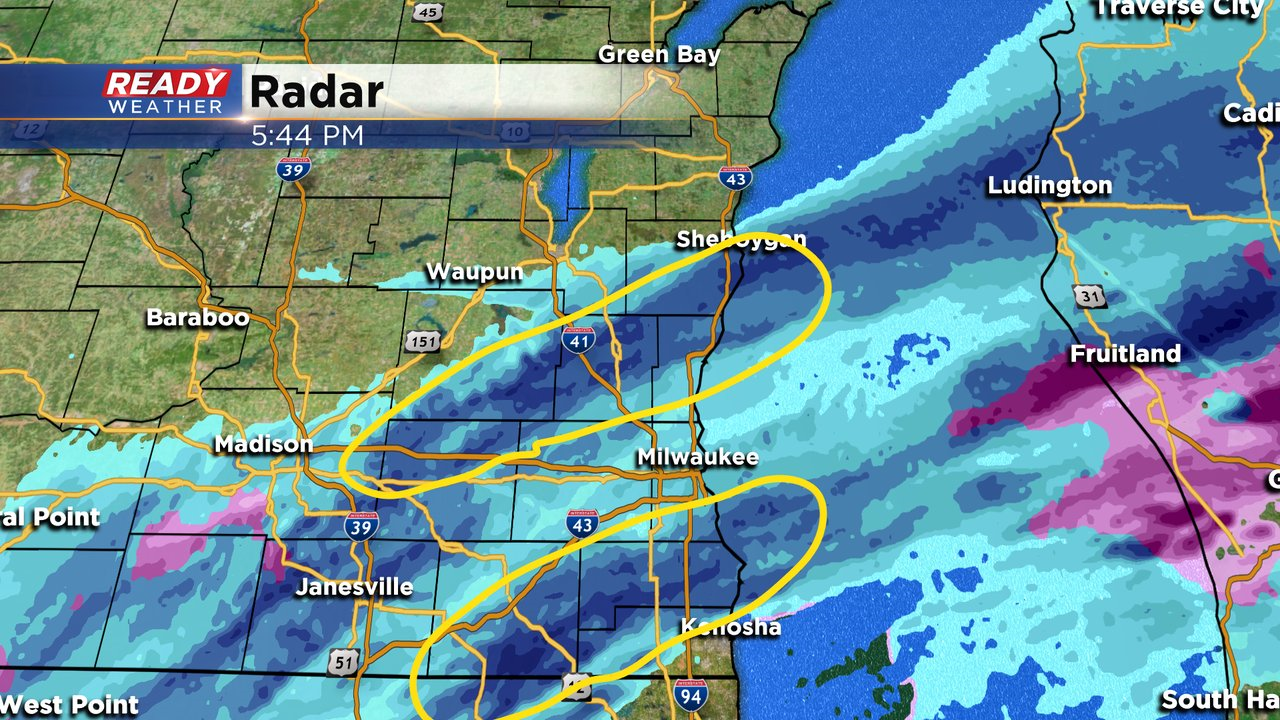 Snow will become lighter by mid evening and taper off completely between 10pm and 12am. Snow totals ranging from 2-5" are expected for most of the area besides the far NW which isn't seeing any snow.

Jefferson county has been added to the Winter Weather Advisory that runs through midnight tonight. 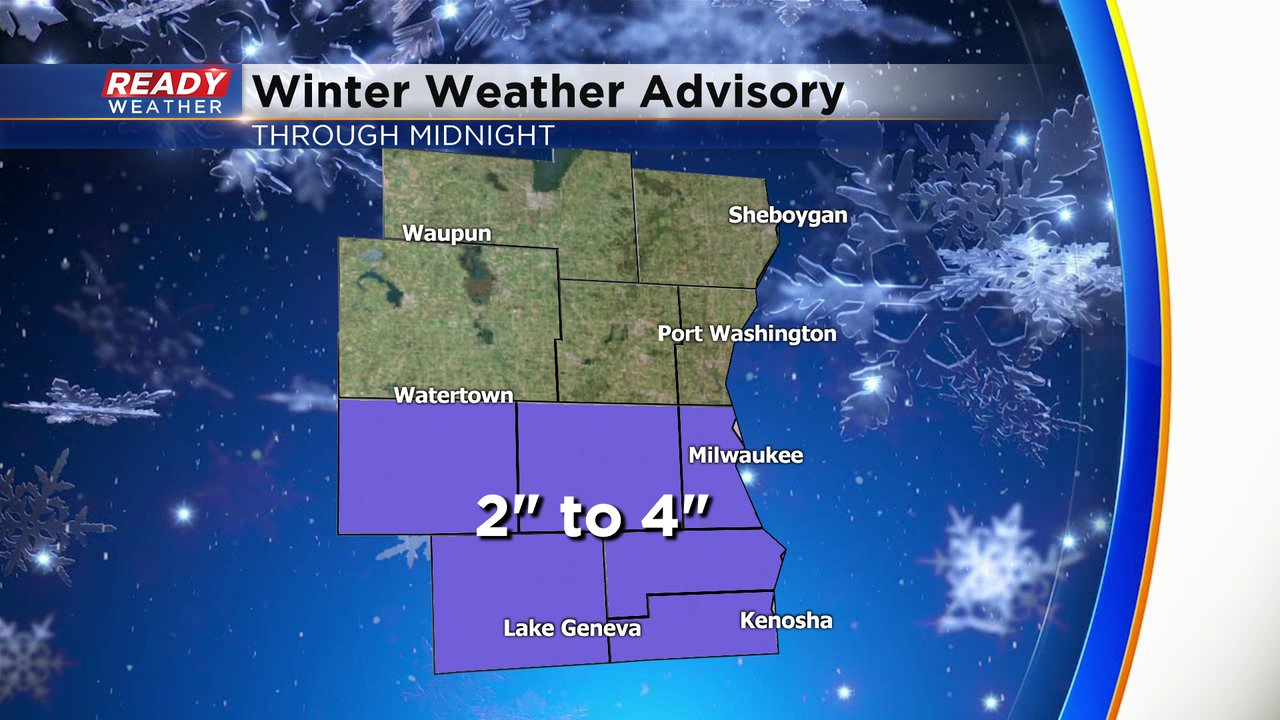 Roads are already in poor shape within the advisory, many of them snow covered or icy. We're still seeing a bit of a wintry mix closer to the Wisconsin/Illinois border, but as we head into this evening the mix will change over to snow before ending late evening. 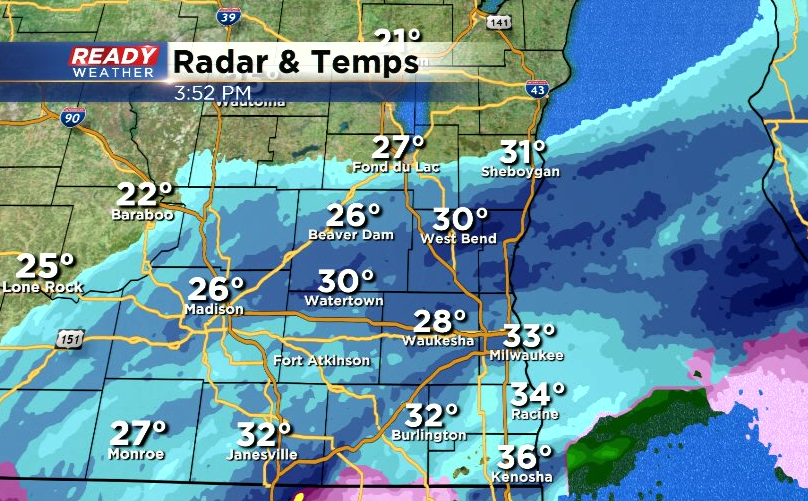 2 to 5 inches of snow looks like a good bet for a good chunk of southeast Wisconsin, with a sharp cut off to the northwest. 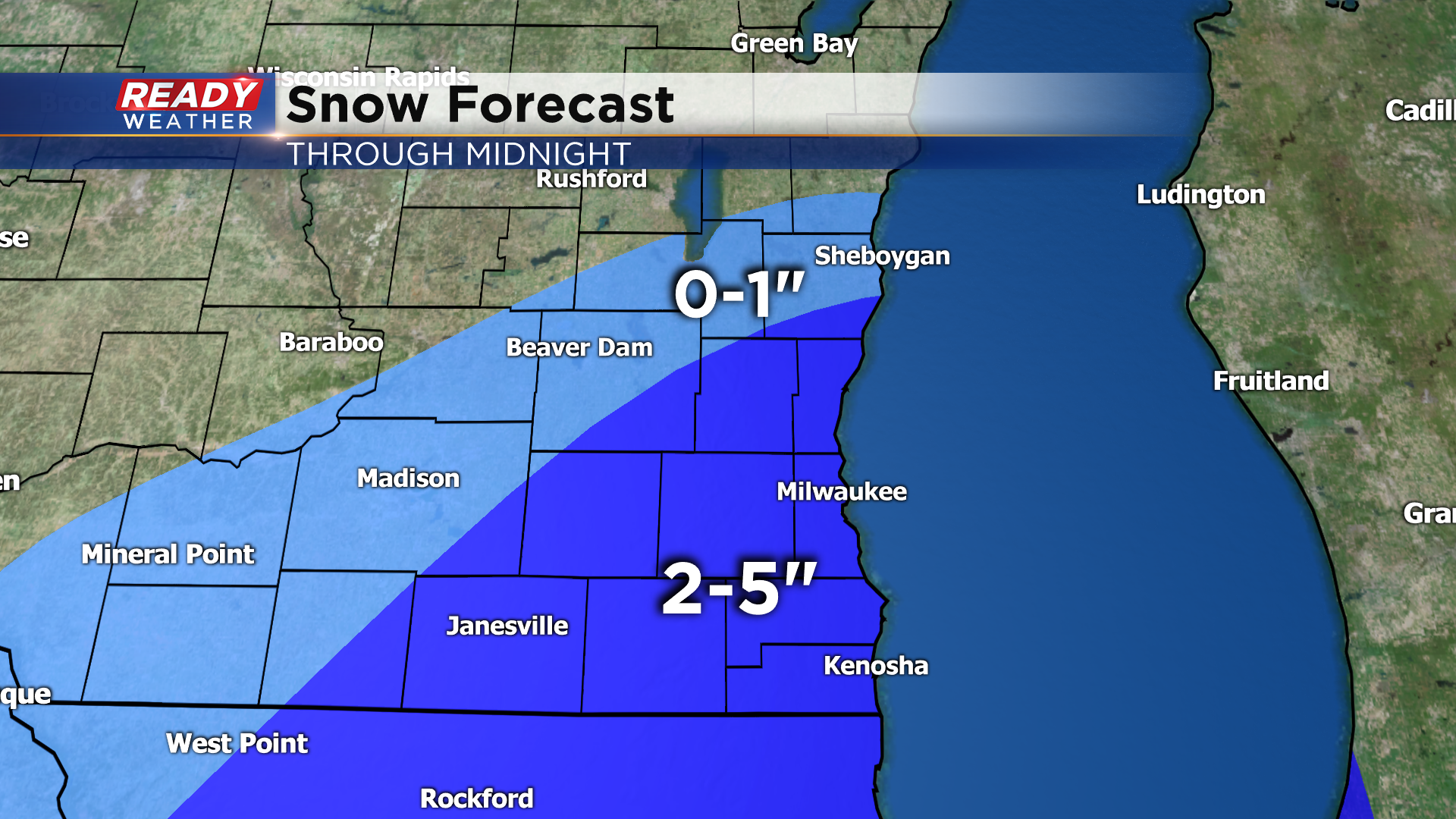 A wintry mix of snow, sleet, rain/freezing rain is pushing through parts of southeast Wisconsin, with a sharp cut off from about West Bend to Madison. 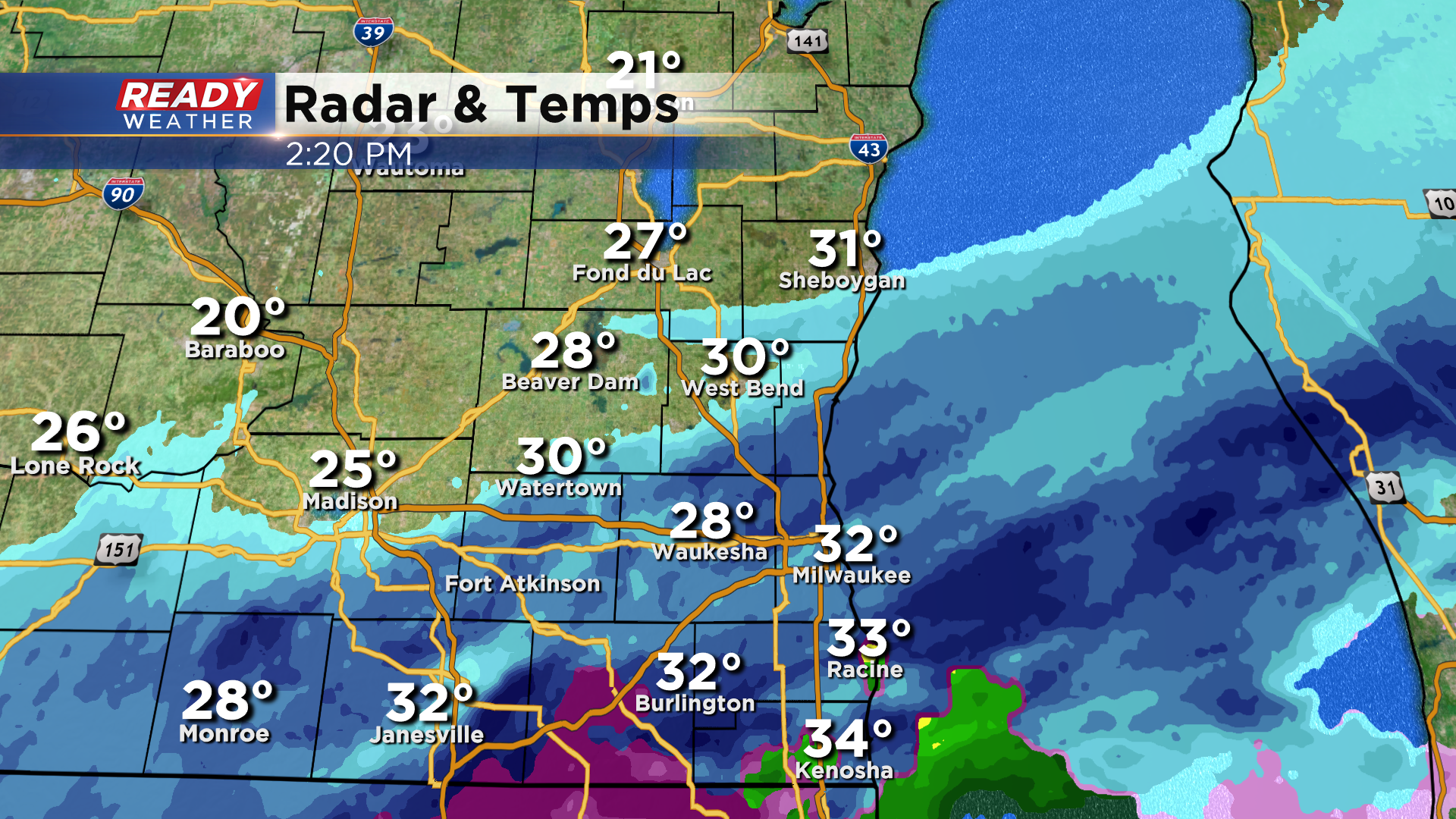 This has been coming down at a moderate to heavy clip at times, which has created slippery and snow covered roads, especially on I-94 from Milwaukee to the state line. 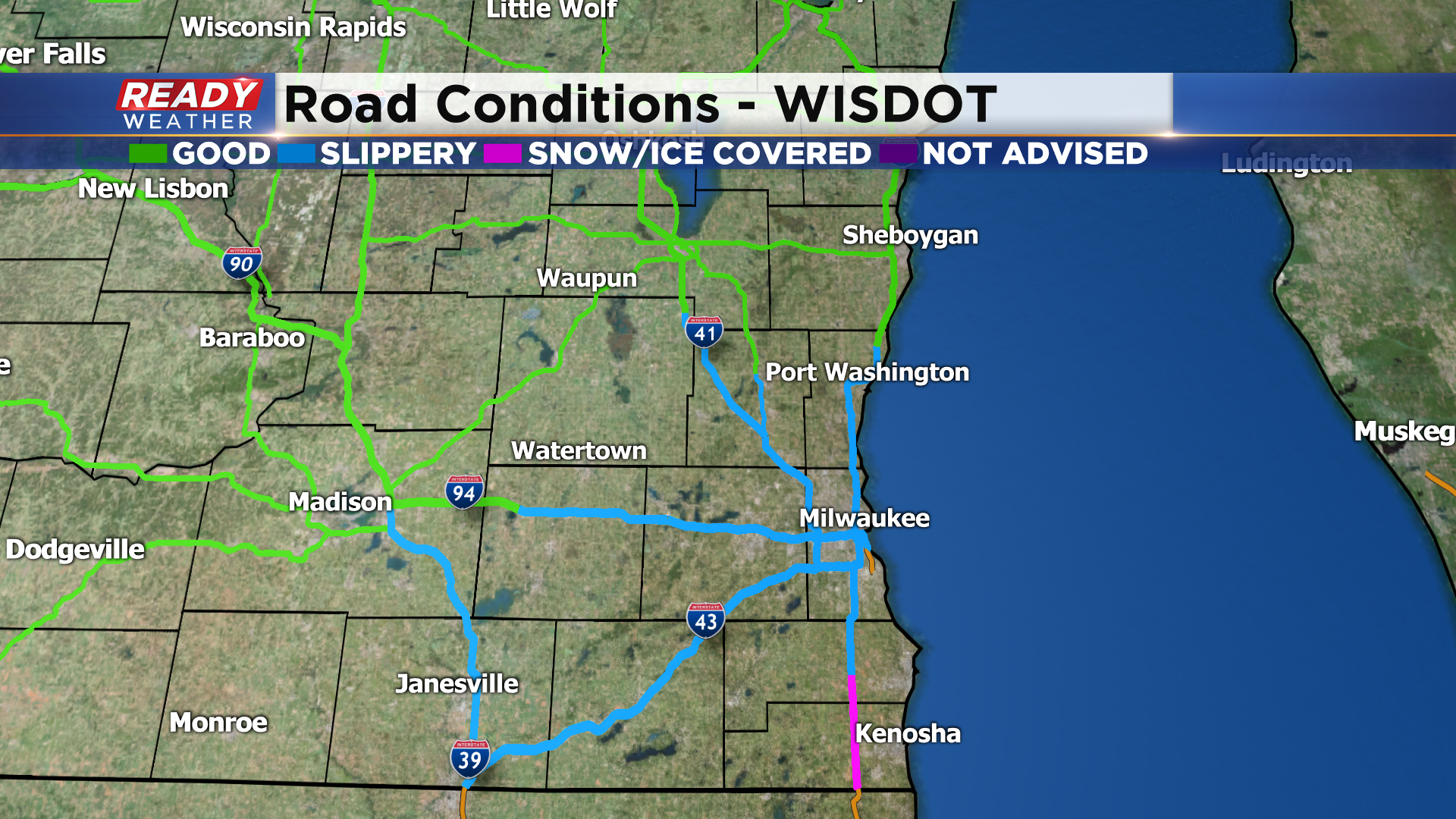 Still think areas along and south of I-94 will pick up 2-3" with isolated higher amounts possible. Any mix should transition to snow by 6 pm with the snow ending around midnight.

Milwaukee and Waukesha counties have been added to the Winter Weather Advisory that runs through Midnight. 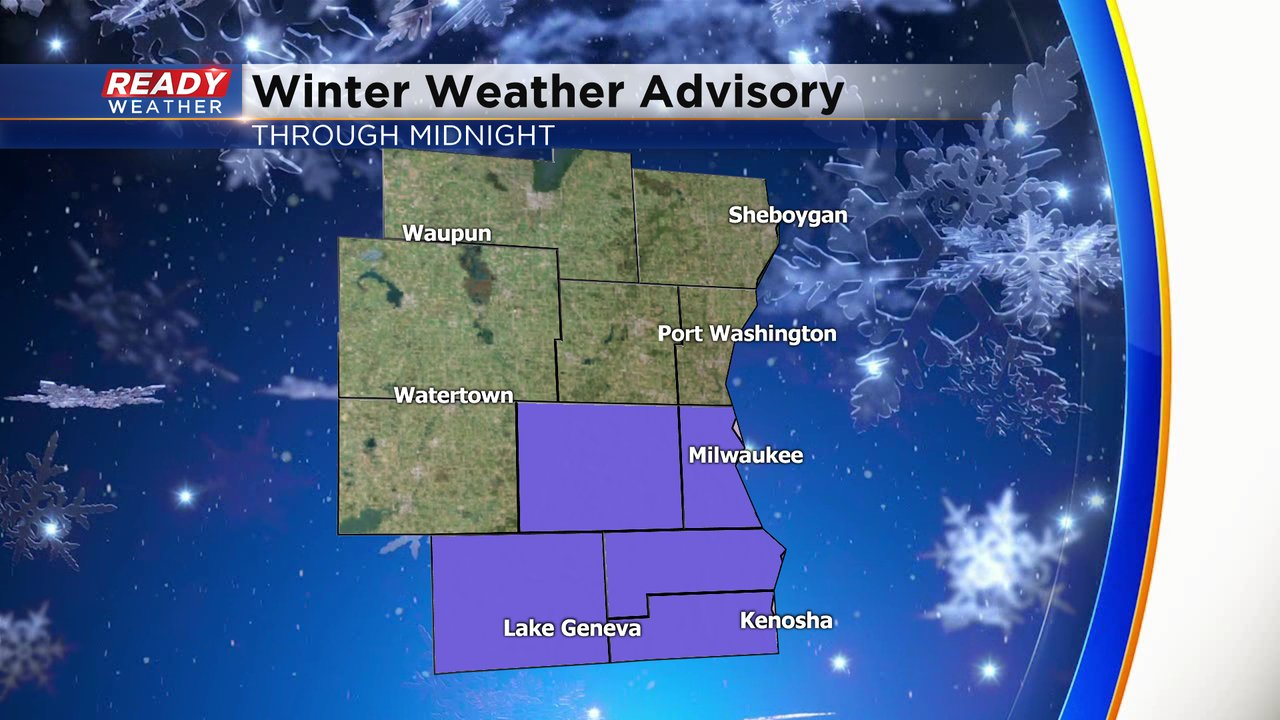 2-3" looks like a good bet for those in the advisory, but locally higher amounts closer to 4" are possible near the lake. However, there's still a bti of uncertainty in the higher amounts as sleet and freezing rain could cut down totals in spots.

One of the more reliable computer runs hints at 4"+ in favored areas south of the metro Milwaukee area, including Racine and Kenosha.  Lake enhancement might be the reason for this.  But also keep in mind, any type of icing will cut down amounts a little bit as well. But at the very least, a 1-3" range looks good for many along and south of I-94 into tonight.  All of the precip should be out of here into the overnight. 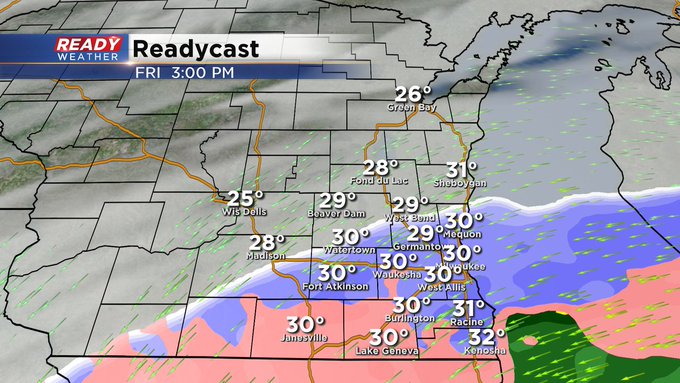 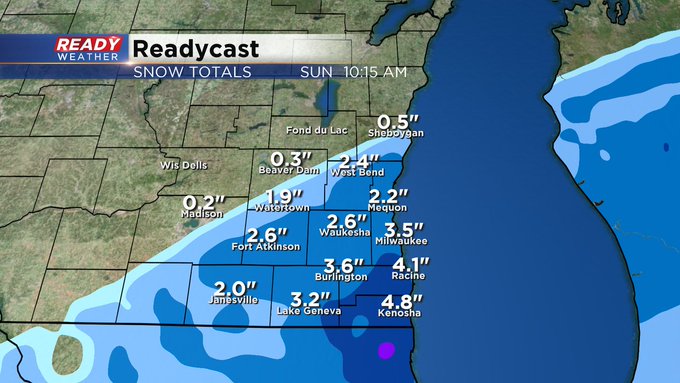 A Winter Weather Advisory is now in effect until midnight for Kenosha, Racine, and Walworth Counties.  This area could easily see between 1-3" of snow if not a bit more.  This general area could also see some sleet and freezing rain.  Of course this could diminish amounts just a little. Please drive with caution this afternoon and evening.  No need to rush on this holiday.

The thinking remains on track.  Snow kicks in this afternoon, especially after 2 pm.  Look for 1-3" amounts, mainly along and south of  I-94.  There could be some higher totals along the lakeshore in Racine and Kenosha counties.  Keep in mind any type of ice (freezing rain or sleet) could lower amounts a bit.  As it stands now, we're forecasting just a few hundredths of an inch at most. I think the biggest threat for icing would be south of Milwaukee.  Stay tuned to CBS58 and cbs58.com for all the latest details. 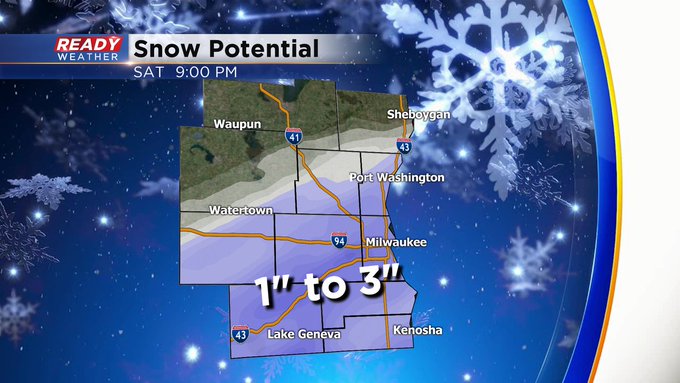 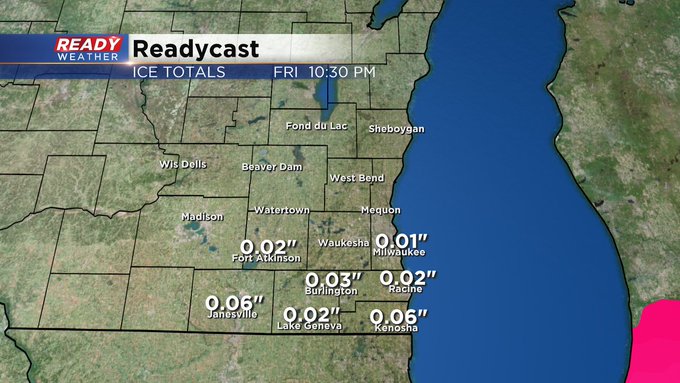 MILWAUKEE (CBS 58)--The second shot of snow in as many days. Look for some snow to develop this afternoon, especially along and south of I-94.  1 to 3 inches will be possible in this general area with the greatest amounts along the lakeside areas.  We could see some freezing rain mix in this evening before the precipitation cuts off into the overnight. 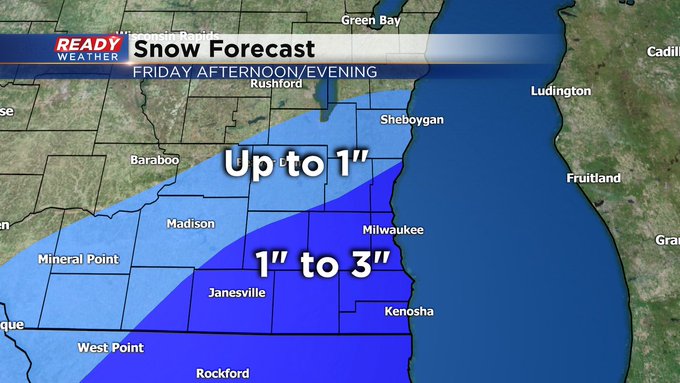 Watch out if you're traveling south and east of our area today.  Winter weather advisories and even an Ice Storm Warning across central Illinois.  It could be an icy mix/mess across Indiana, Michigan, and Illinois.  Again, mainly snow for us, especially the southern part of the viewing area. 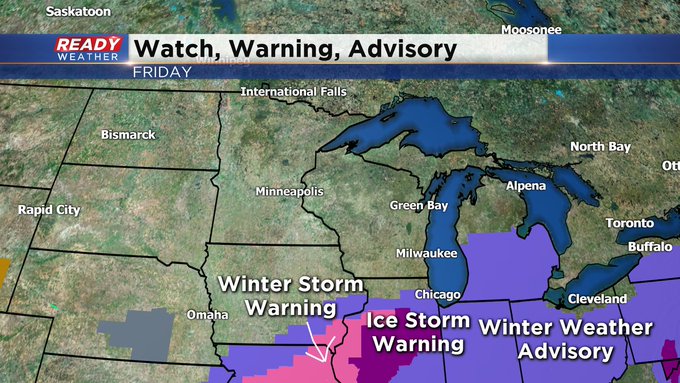 There is a slight change of snow later Saturday night, but some computer models are hinting otherwise.  All in all, the weekend is looking pretty good and much of next week as well.  We do have a risk of wintry weather by next Wednesday.