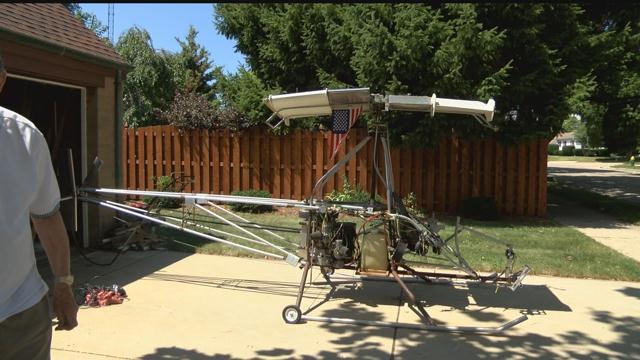 For decades, people have been imagining a future world where we'd all have access to flying cars. Well there's a 94-year old inventor in Racine who's been working on the concept for a while now we got a look at the progress he's making.

A flying car? It's not something you typically hear of, but Russell Solheim says building one of these has been his lifelong dream.

\"Well this is a helicopter right now but when I build the surround around it, it'll be a flying car,\" said Solheim.

That's right-a fully functioning helicopter and car, all in one.

\"This will go at most 80 miles an hour in the air. On the ground it would be a normal car,\" said Solheim.

Solheim, a former mechanical engineer has been perfecting  this particular model for a long time

For years, people have been trying to build a flying car, some with success but Solheim's is the first of its kind.

\"There was one at the airshow last week. An excellent one. Beautiful car. But it requires a runway,\" said Solheim.

Solheim has patented retractable rotary blades that extend out 16 feet when the motor is started, as you see in this model version. Springs pull them back in after flight.

\"You can come home and put it right in your garage. You save the cost of paying for a hangar,\" he said.

The base, a Wilson helicopter, is nearly complete, while Solheim tweaks his plans for the car.

\"Where is the engine of the car going to be?\" asked our reporter.

\"I haven't decided yet,\" said Solheim.

Solheim says the flying car is about two years from completion but he's already planning for the idea to take off.

\"In the future if these are successful, the city would have to have cement take off places here and there, instead of driving all the way to the airport,\" he said.

Solheim's next move is getting the plane off the ground. He hopes to have it hovering at least a foot off the ground in the next few weeks.

And though this plane has yet to take flight, Solheim says he's got high hopes that it will happen in the next two years.