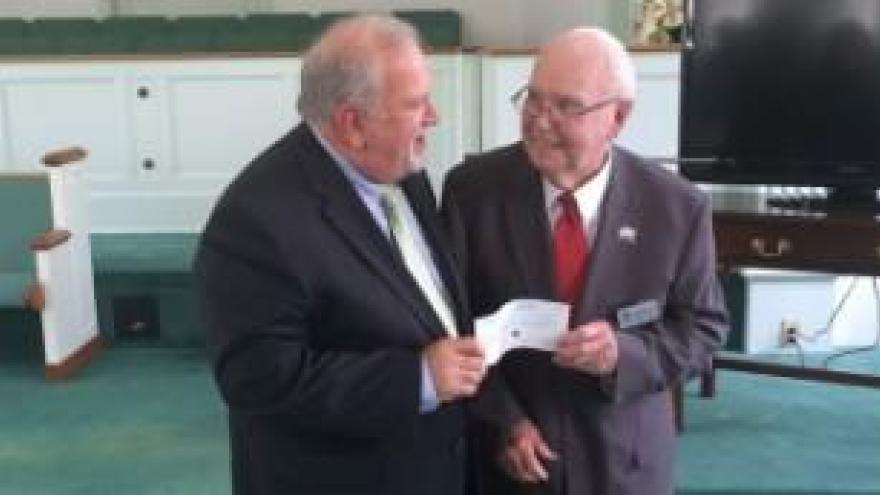 (CNN) Thirty-two years' worth of recycled newspapers and magazines -- more than nine million pounds of it -- netted 86-year-old Johnny Jennings $400,000, all of which he gave away to those in need.

Recycling started off as a lesson to his son, Brent Jennings, about healthy money habits. Back in 1985, the Georgia native began collecting and selling paper with his only child, then put their profits into a savings account.

"The first memory I have of my Dad is of us recycling," said Brent Jennings. "We did that until I was about 17."

Years later, the money saved from recycling was enough for Brent Jenning's down payment on his first home.

Now that the son is grown with a family of his own, Johnny Jennings continues to recycle. Community members are involved now, sending books, food, clothes and other items his way.

Every dime he earns goes to Georgia Baptist Children's Homes & Family Ministries. He chose the charity after a "heartbreaking" experience.

"When I was 18-years-old, I visited the children's home and we had a meal with the people there," he told CNN. "As we got up to leave, three little boys grabbed me around the knee and asked me to be their daddy."

"From that point on, I did all I could," he said. "I give them food, clothes... whatever they could use."

Throughout the week, he collects paper from local businesses and churches, then recycles it at a local center.

Once a year, he presents the children's home with a check from all the money raised. The checks usually range anywhere from $10,000 to $35,000.

"Johnny Jennings is one of the most gracious individuals I have ever met. I have always admired his quiet, humble spirit, his commitment to helping others and most of all, his love for the children in our care," said Georgia Baptist Children's Homes & Family Ministries' president Kenneth Thompson. "We are so blessed to have someone of his character dedicated to serving our ministry."

"I hope you see why I think Mr. Johnny Jennings' story needs to be told as it is a good one," posted Shay Drennan-Love, who met Johnny at her office where her team recycles paper. "He is the last of a dying breed. Our generation and the ones to follow could learn a lot from Mr. Jennings."

"He's a one-of-a-kind gentleman and I'm proud to say he's my dad," said Brent Jennings, who fought back tears talking about his father's contributions.

"He's not only my dad. He's the dad to thousands of children throughout the state of Georgia."

Jennings shows no signs of slowing down. During his interview with CNN, he reminded himself aloud that he needed to drop off another load of paper.

"I hope that I can keep on and keep my health," he said. He plans to continue donating "until I turn my toes up."

But more than the money and the time, he wants to make this message clear: "If you got it to give, give it away."